I’ve learned something interesting today. In Northern Europe we call this holliday season ‘Jul’ and now I know the reason why. It might fill out some missing links in you’re childhood memories as well, so I decided to share it with you all.
Let’s start with a description of Christmas in Norway I found on the net:

Christmas in Norway by Bill Egan, Christmas Historian
Norway is in Northern Europe, bordering the North Sea and the North Atlantic Ocean, west of Sweden.
Norway is the birthplace of the Yule log. The ancient Norse used the Yule log in their celebration of the return of the sun at the time of the Winter Solstice. “Yule” came from the Norse word hweol, meaning wheel. The Norse believed that the sun was a great wheel of fire that rolled towards and then away from the earth.
The Norse Yule log is most likely responsible for the popularity of log-shaped cheese, cakes, and desserts that are served in numerous nations during the holidays.
On Christmas Eve it is customary to visit the gravesites of departed family members and place candles on the graves.
On December 24, all work comes to a halt late in the afternoon. Everyone puts on their finest clothes to greet the season and the largest sheaf of grain is hung out for the birds to make their Christmas merry, too. Christmas Eve dinner begins with rice porridge which contains one lucky almond. A bowl is also set out for the barn elf so that he will continue to watch over the animals and not turn mischievous. A Christmas pig provides most of the meat dishes.
The worldwide popularity of Santa Claus has caused the resurrection of an ancient Norse figure called Julesvenn. In ancient times he would come during the feast of Jul to hide lucky barley stalks around the house. Now, called Julnissen, he has multiplied into a group of gnomes who come on Christmas Eve to bring gifts to good children.
A Julebukk made of straw is a very popular Christmas decoration. It is named for the goat that drew the cart of Thor, the god of thunder in Norse mythology.

But the back to the original season celebration:

The Yule Log – A Pagan Tradition
To celebrate their belief in the powers of the gods, the Norsemen (Vikings) held festivals. The father of the Gods was Odin or Thor, commonly called the Yule Father (Yule referred to the sun). The original Yule Log Ceremony was a festival celebrating the sun during the winter solstice, which occurs close to the time we celebrate Christmas today. After the Norman invasion of England in 1066, the Yule Log tradition was passed on to the British and evolved to the tradition that it is today.
Other Anglo-Saxon traditions include celebrating good health in the New Year by drinking from the wine-and-spice-filled Wassail bowl; baking Yule dough into figures shaped like people, with raisins for eyes and noses, to symbolize Christ (these Yule Dough people are where today’s gingerbread men came from); burning a Yule Candle, which was big enough to burn for the 12 days of Christmas; and hanging a sprig of mistletoe for fertility and romance. 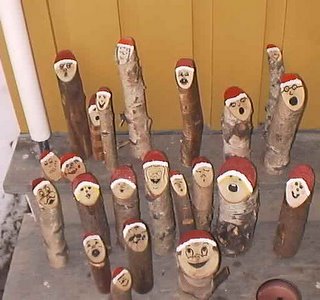 Here you see Yule Log as Christmas decorations, or a choir – my sister’s speciality!
Here is another blogger writing about the Yule Log Ceremony.
There is more between heaven and earth than most other places!

7 thoughts on “It was Yule before Christmas!”