On my way from the buss to work this morning, I passed the Grand Hotel at Oslo’s main street, Karl Johan. It’s close to the parliament, the old university and the Kings Castle, so it gives you a majestic atmosphere. At this hotel, the Nobel Peace Price winner of the year take residence in the beginning of December every year to receive the award and give his speech in Oslo City Hall the 10th every December. 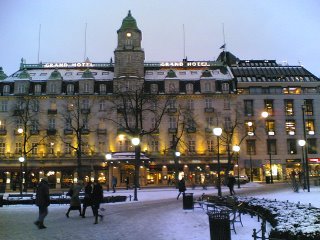 The Grand Hotel first opened its doors in 1874. The Louis XVI revival style building, with its hint of Nordic art nouveau and characteristic clock tower from 1913, is right on Karl Johans gate, Oslo’s main street, and stands as a symbol of a first-class hotel with tradition, atmosphere and style.

The Nobel Peace Prize for 2005 was to be shared, in two equal parts, between the International Atomic Energy Agency (IAEA) and its Director General, Mohamed ElBaradei. Any suggestions for candidates in 2006?