Walking around in Oslo, Norway – the Winter Wonder Land – this morning, it was in silence. You could hear a pin drop or I might say: the snow flakes falling. We’ve got back the normal winter weather for the season: – 6 degrees C and some snow. Horrible some will say, but I say wonderful ;-) One of the fascinating things about Nordic countries are the significant different between the four seasons. You cannot enjoy a sunny and warm day at the beach as good without experience a snowy, cold day. The only thing I miss was a day off to go skiing in the mountains. 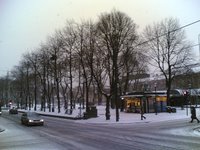 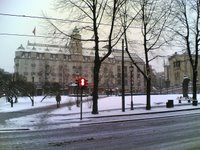 The pavements are covered with snow, the branches on the trees are bare and the horizon is in a whiter shade of pale. These pics are from down town – silent right? 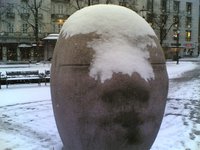 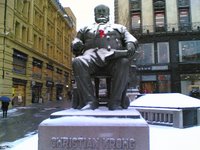 Walking from a meeting back to the office, I also noticed silence in the snow cowered sculptures on my way. In a funny, sleepy face, on the sculpture of Christian Krohg -August 13th 1852 – October 16th 1925 – who was a Norwegian naturalist painter, author and journalist. 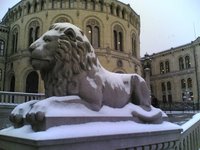 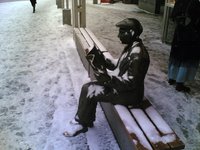 Even the Lion – guarding the parliament – taken from The Coat of Arms of Norway, one of the oldest in Europe – was covered and looked freezing cold, but majestic. The last one I saw was this cute “Newspaper Reader” in front of VG, the biggest Norwegian tabloid paper. He was in white silence too, but still reading with pride and dignity.

Entering the office, I thought how lucky I was living in the land of the significant four seasons.

And then: in the evening I attended a meeting where a famous Norwegian blogger – Eirik Solheim – was giving a presentation. Among a lot of other things he has done is a season capture experiment. He had taken pictures after pictures throughout a whole year from the same spot in his living room window and put them together in a muvee. I strongly recommend you to see in Eirik Solheim’s blog!

Update:
I met this tiger the week later and could not resist sharing the cold wildness with you :-) 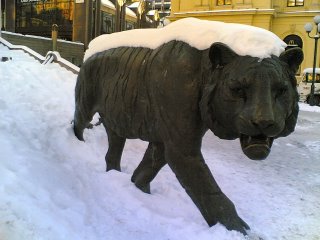 Writing a blog about Norway and our significant four seasons, it’s time to report about winter weather – at least a good taste of it: You see, this year’s first snow in Oslo came last week. It started late in the evening, so we were all warned for the next day, and in the morning…

RennyBA’s Terella is about the significant four seasons and how we enjoy each of them in Norway, right now; the Winter Wonderland. The love of being outdoors and exploring the nature is an important part of this, including the fascination of the colourful scenery at sunset and sunrise. It never ceases to amaze me with…

The Yuletide anticipation is crackling in the air – the tree is decorated as is the rest of the house – even the presents are tempting us, soon ready to be opened and surprises revealed. In Noway the celebration starts at 5PM at Christmas Eve, when the church bells ring. Then we have dinner at…

The Polar Explorer, Discoverer, Researcher and Pioneer Amundsen from Norway became the first person to reach the South Pole on Dec. 14, 1911. Hosting a blog about Norway; our history, culture, traditions and habits, it would have been a disgrace not to mention it today – 100 years later. This year actually call for double…

In Oslo, Norway at 60° North and 6 hours of daylight at the winter solstice in December, you sometimes look for signs to brighten up your day. You could look up in the sky for a astronomic phenomena, like “White Dwarfs”: After the outer layers of a star are ejected, the mass of the remaining…