Get Started
| 4 Comments
This week I attended the Norwegian Computer Society’s yearly IT convention for the last tree days. As one of the hosts, it has been rather exciting and exhausting. Never the less, I have learned a lot and had the pleasure of networking – meaning meeting new and interesting people domestic as well as abroad – even some bloggers:-) What I would like to share with you here, is the struggle of getting there in the morning as we have had quite a lot of snow lately. Yes, I love snow and everything else in the winter wonder land, but sometimes it can be a show stopper. As to illustrate, I use my mobile phone camera of course and these first two pics are from the early morning Tuesday around 7PM. 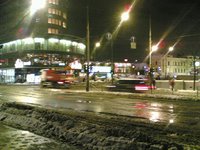 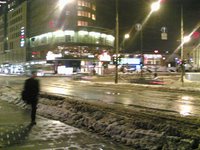 Still dark, the city is slowly waking up and the people are getting out of their igloos lol. You see an office and shopping centre in front and on the right side, the Oslo central railway station – a more than a 100 year old building. 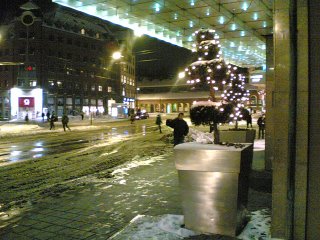 Turning right, I had to capture the entrance of the conference centre as well. Actually it is one of Oslo’s oldest quality hotels and in the good old days it was called Viking. It was built in 1952 to host the celebrities and the participants of the 6th winter Olympics. This year it is the 20th winter Olympics. Times go by and I know what I am talking about as I am born in 1952. As a matter of fact 9 months after the games in February! As some of you might now, Norway has also hosted the winter Olympics in Lillehammer 1994 as well and is of course the world’s best winter sports land. You find the proof of the pudding here and as you can see we won the most medals. No wonder, as the Norwegian are born with skies on – as they say. 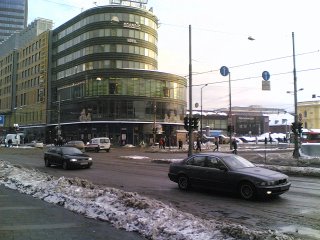 But back to the slush: the next afternoon, we even had some sun shine and I grabbed my mobile phone camera to capture the same square. You might say it is slushy, and since down town, very dirty and wet snow. I’d rather go up in the mountains to experience the relaxing excitements of skiing. But duty calls, so it will have to wait to this weekend – if I can get my ass out of the TV chair watching the Olympics :-) 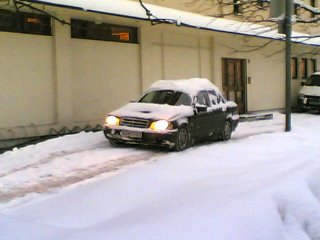 On the last day of the convention which was well started, I didn’t have a presentation before late in the day so I took the advantage of getting up later in the morning. We had even more snow over night. To give you an idea of how people who haven’t discovered the excellence of public transportation have to cope with. I guess you can see it is a car, but quite covered and icy.
Some of you might have been inspired of the tempting description of the Norwegian winter Olympics? Follow the Torino games here!
Winter

4 thoughts on “Oslo, Norway in Slush”