There are a lot of rumours about the artic wild life in Norway. Some say there are even Polar Bears in the streets. Some are exaggerating and some are more or less the truth. In my earlier articles I have present you the Winter Wonder Land with lots of snow and ice, but yet so charming and joyful. We are used to living with the significant four seasons and from my childhood and have learned to love the snow and the play opportunities it brings. We are acclimated from thousands of years back to our roots, the Vikings. (Please click to enlarge all my pics!) 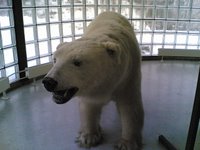 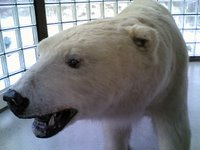 On my way from a meeting the other day, I met a Polar Bear in the reception and of course I could not resist using my Nokia Mobile Phone camera to capture it. But don’t be afraid, it is a stuffed animal, but yet so powerfully expressed. There are no Polar Bears in Norway what so ever, but in the Norwegian territory of Svalbard, there are a lot of them. 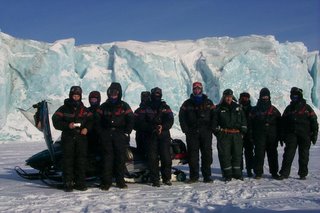 I have seen them live there on a snow scooter safari in 2000 and the animal is beautiful but do not get too close! In the picture above you see me (with red gogles) in front of a 7 000 year old glacier. 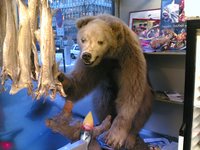 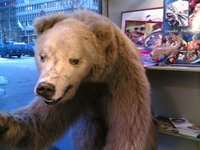 Passing a fish and game shop, I also saw this Brown Bear which I had to capture on my hunting trip to save evidence for my blog about the wild life in Norway. This one is stuffed too, but his parents and siblings live in the forest all around in the south part of Norway. In front of the bear, you see klippfisk (dry salted cod) which actually was one of the biggest export articles from Norway some hundred years ago. It’s used as the important ingredients in Bacalao which is a famous dish in Spanish kitchens.

So now you know more of the truths and false about the wild life in the Winter Wonder Land :-). If you like to learn more about Svalbard: Norwegian sovereignty, regulated by the Svalbard Treaty of 1920, click here. And I do recommend a visit to a blog friend of mine; Oslo Foodie and see his recipes for Bacalao here.

6 thoughts on “Myth busters – Polar Bears in the streets of Oslo?”