I spent some quality time with my wife again today. We had lovely sunny weather and it was quite warm for the season, at least it was above freezing. My wife thought it was worth the effort to get me off the sofa for awhile. I am terribly depressed about the Norwegians results in Torino, Italia since we have never won so few medals – especially gold, in the last 4 Olympics. So a walk out in the lovely winter weather was more tempting than sitting in front of the TV.

We went to a beach on Oslo Fjord which lies behind Henie Onstad Art Centre. Sonja Henie was in fact a great Olympian as she won 3 gold medals in figure skating in Sankt-Moritz (Switzerland) 1928, Lake Placid (USA) in 1932 and Garmisch and Partenkirchen (Germany) in 1936. 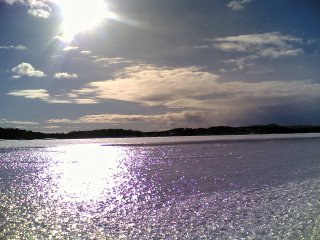 Walking along the beach, I just had to capture this lovely scenery as the sun was sparkling on the ice. It’s around 1PM and the pics are of course taken with my Nokia Mobile phone (click on them to enlarge!). 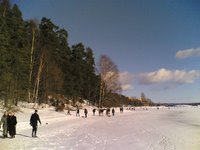 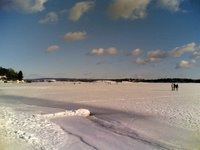 There you see a lot of people who are taking advantage of the lovely weather, literary walking on the water. It is a tradition for Norwegians to go for a walk out in the nature on Sundays, often on skies in the winter time of course. These people might be a bit more urban, so they use their feet instead to explore the wonderful landscape. If you look closely at the picture to the right, you might see someone fishing too. 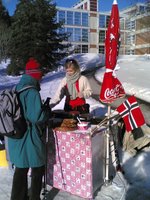 By the path at the beach we met this young girl who made a small fortune selling waffles. There were hundreds of people passing her stand and everyone wanted a piece of this heart shaped goodies with raspberry jam and cream on top. She is actually a regular with her stand throughout the whole year, since a waffle is something that tastes good in all four seasons. But today it was winter, so we appreciate the warmth while sitting on a bench for a rest. 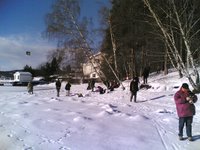 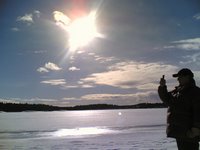 There were a lot of people doing the same and of course my wife had to capture the crazy Norwegian sitting in the snow, just relaxing and enjoying the winter wonder land. In four months, they will be sitting at the same spot but then almost naked and not being able to walk on the water but in it. Then there will be a nice opportunity for swimming and then we will remember our walk on the same water today. As said before: the significant four seasons are one of the best things about living in Norway :-)

Click and read more about Henie Onstad Art Centre and Sonja Henie. If you like to learn more about waffles, take a look at Oslo Foodie!

6 thoughts on “Walking on Water”