This weekend I’ve attended The Norwegian Computer Societies national assembly at Tromsø. We had beautiful weather during the flight from Oslo and of course I had to capture the moment with my Nokia mobile phone as we where heading up north in Norway. Please click on the pics to enlarge! 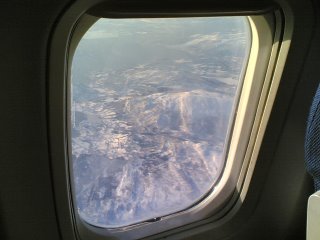 At a latitude of nearly 70 degrees north, four days’ sailing from Bergen and barely a two-hour flight from Oslo, Murmansk or Longyearbyen, at the same latitude as Alaska and Siberia, between the island landscape, fiords and mountain peaks, you find Tromsø – Gateway to the Arctic and capital of Northern Norway. As far back as a century ago, visitors were surprised to find culture, intellectual life and the current fashions so far north, and the city derived the name Paris of the North. 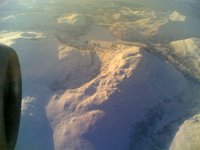 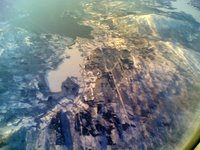 In spite of their location so far north, Tromsø and Lyngen both enjoy a moderate insular climate. Summer weather ranges from five degrees Celsius and rain to 28 degrees and fantastic swimming conditions for the undaunted. Winter in Tromsø is not especially cold. The record low temperature in Tromsø is minus18 degrees Celsius, while the average January temperature is minus four, but in return there is often a lot of snow. 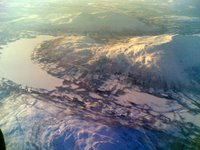 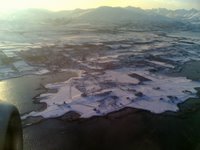 The Midnight Sun is visible from around May 21 to around July 21. Between November 21 and January 21, the sun disappears under the horizon and we experience the Polar Nights. It is not completely dark during the middle of the day, and the light and colour in the sky is amazing when the weather is favourable. 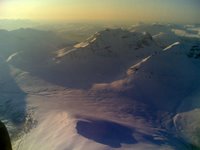 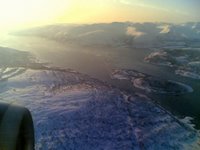 Tromsø is situated right in the centre of the Northern Lights zone and is therefore, together with the interior ice in Greenland the tundra in northern Canada, among the best places on earth to observe this phenomenon. Most of the Northern Lights outbursts visible from Tromsø are green, but large outbursts can also include other colours. In my post at November last year, you can read about how a Norwegian studied this phenomenon in a Terella – a model of the earth – actually the reason why I cal this blog RennyBA’s Terella :-).
There will be more posts about this exotic place in the northern Norway in the days to come!

9 thoughts on “Tromsø from Above”