Since this is a blog about my daily life and the significant four seasons in Norway, I can’t miss the chance to tell you about another sign of spring – 1st of May, the labours day. I’m not that political active and was born a true capitalist, but have gradually changed into a social democrat. Who know, I might die as a communist :-)

The socialist Labour Party is responsible for the creation of Labour Day. It became a Norwegian national holiday celebrated every May 1st following World War II, but the idea originated in Paris at international labour congress in 1898. Labour Day was strictly observed in Norway for the first few decades of its existence. At that time, the life of workers was hard. Working six to seven days a week, ten hours a day, for very little money was the norm. A national day of rest was truly a significant event back then.

Today, referring to my article below, since Norway is ranked the best place to live in, there are new battles to fight: equal rights between the sexes, improvement of education, anti social dumping (there are a lot of foreign workers in Norway with low wages) and some even fight for a 4 day work of week. What I like the best though, is that the demonstrators are more focused on unfairness and difficulties in other parts of the world and people who are repressed and threatened for their race, religion or the colour of their skin. 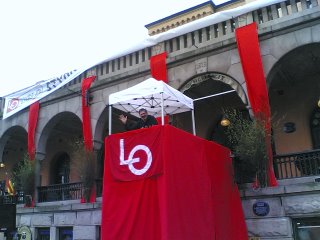 On the 1st of May in Norway, political leaders give their speeches all over the country. In Oslo, at the “Labours Square, Youngstorget, LO (The Norwegian Confederation of Trade Unions) are the host. In the picture above, you see the podium and I could not resist having myself captured from there. Maybe I run for Prime Minister in the next election :-) 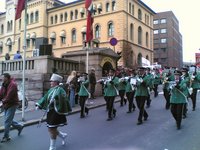 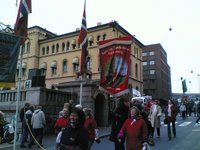 What reminds me most of spring this day is the brass marching band playing in the parade. I love their music and it is like hearing the nation coming out of hibernation. Most of the bands in Norway are school bands which have been practising all winter long and are now ready to salute the new season. They will be an important part of our 17th of May – our National day – and I can hardly wait to tell you about it. Then the children will be the participants in the parade. That is what’s so charming about how Norway celebrates their signing of the constitution.

I had my mobile phone with me of course – as always – and since it also makes videos, I will like to show you an example of the brass marching band playing. Not the best quality, but I hope you get the idea of them. One of my bonus children is playing in a band like this. And this year, their grandmother from the US is coming over. We can hardly wait to show her the proud drummer playing for her on the 17th of May. So stay tuned.

I’m going to Sofia, Bulgaria, this week, so it might take a while before I’m back with another sign of spring in Norway and some pictures from Bulgaria as well!

After all the positive response on my last post (scroll down and check!): ‘Wandering through time in old Mariestad’, I’ll gladly give you all a follow up. There is always new jewelers to explore in our vacation city you know. This time it’s the medieval cathedral. Mariestad Cathedral was built between 1593 and 1625 as…

The Museum of Cultural History in Oslo takes you back hundred (sometimes thousands) of years back in Norwegian culture, architecture and the daily and rural way of living. The Open-Air Museum sets the scene for entertaining and educating activities all year. In my last post you saw Norwegian folk dance and our traditional costume Bunad….

Belated greetings to regulars and new readers, wishing you all the best for the year to come! This will be a short note to tell that we had a wonderful New Year Celebration in Mariestad, Sweden. A traditional Swedish seafood dinner in the evening and then all the four Norwegian apartment houses in the neighbourhood…

My wife and I have the privilege of a visit from a little girl who comes and stays with us once a month. This weekend we took her to our vacation house in Sweden. For something fun to do on Saturday, we took her to a local mini zoo to experience and greet the animals….

I’m tagged again and of course flattered. This time by my good blog friends Chase, Duke and Thesserie. I try to return the tagging favor when I feel it supports the theme of this blog about Norway and the Nordic countries; our culture, tradition and habits. I have to do it my way, and this…