This very special day, brings a lot of good memories to me from my childhood. I remember the anticipation and the excitement begining the day before. The adults were busy cleaning the house, preparing the foods, ironing the clothes and the flags and I got butterflies in my stomach. It was hard to get to sleep at night, but I remember my mom’s trick: the faster you get to sleep, the faster the 17th of May will come!

The day started with a big bang. The salute for the day was detonated at 7AM on the hill behind us. I woke up floating over the mattress. I was never faster getting dressed and into my new clothes. This was usually the first day we could use summer shoes instead of the winter boots. The new white shirt and tie where hard to get on but dad always helped. 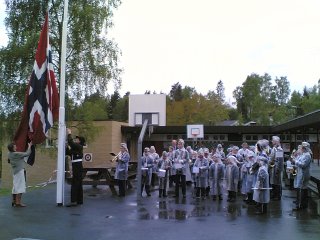 At 8 o’clock in the morning the flag is raised and the band is playing the National anthem: ‘Ja vi elsker dette landet’. The big day has started, almost as big as Christmas Eve and my own birthday!

Norwegian Constitution Day
17th of May is the National Day or ‘Grunnlovsdagen’ (Constitution Day), of Norway and is an official national holiday each year. The Constitution of Norway was signed at Eidsvoll on May 17th in the year 1814. The constitution declared Norway to be an independent nation. By historical coincidence 131 years later, the Second World War ended in Norway just nine days before that year’s Constitution Day, on May 8, 1945, when the occupying German forces surrendered. Even if The Liberation Day is an official flag day in Norway, the day is not an official holiday and is not broadly celebrated. Instead a new and broader meaning has been added to the celebration of Norwegian independence at May 17th. 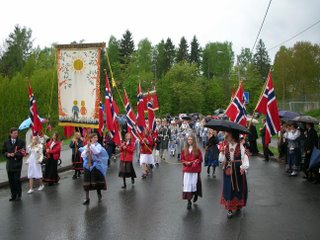 The front of the parade – please click all pics to enlarge!

Children’s parades
All over Norway, children’s parade with an abundance of flags form the central elements of the celebration. Each elementary school arranges its own parade, led by the school’s own marching band. The parade takes the children through the community, often making stops at homes for senior citizens, war memorials, etc. 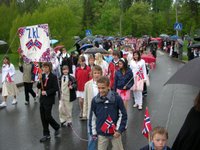 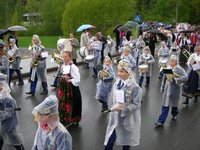 The Children Parade today and unfortunately in rain :-(

Typically a school’s children parade will consist of some senior school children carrying the schools official banner, followed by a handful of other older children carrying full size Norwegian flags, and the school’s marching band. After the band the rest of the school children follow with hand sized flags, often with the junior forms first, and often behind self made banners for each form or even individual class. I do remember my feet where sore after one hour marching, but that was part of the game you know:-) 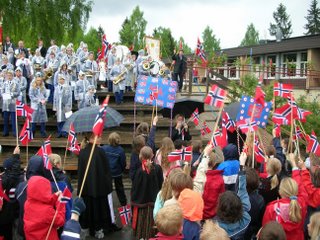 Chilrdren waving the flags before the parade.

Nearby kindergartens may also have been invited to join in. As the parade passes bystanders often join in behind the official parade and follow the parade back to the school. During the parade a marching band will play and the children will sing the Norwegian national anthem, along with other marches with lyrics about the celebration of the National Day.

In addition to flags, people typically wear red, white and blue ribbons. Although a long-standing tradition, it has lately become more popular for men, women, and children to wear traditional outfits, called bunad. The children also make a lot of noise shouting “hoorah!”, singing and blowing whistles. In addition to children’s parades, there are parades for the public – often in the afternoon – where every citizen is welcome to join in. This is led by marching bands and often local boy- and girl scouts, local choirs, etc. 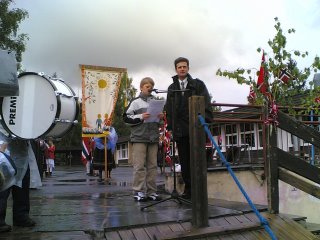 The 6 grader holding the speach for the day.

All parades begin or end with speaches. Both grown-ups and older children are invited to speak. After the parades, there are games for the children, and often a lot of ice cream-, soda-, candy- and hotdog-consumption. I remember we got some money from dad that day and could have as much as we wanted. No wonder this day was very special for the children:-)

21 thoughts on “17th of May – Norwegian Constitution Day”