I have the privilege of having my mother in law from the US visiting for three weeks and that gives us the chance to show her a bit around in Norway. This weekend we drove all the way from Oslo to Bergen and had a splendid time climbing the mountains, watching the valleys and the fjords. I will tell you about the 9 hours drive later, but now I’ll concentrate about the city of Bergen itself.

Ever since the intrepid King Olav Kyrre sailed into the harbour and founded the city in 1070, Bergen has attracted people from all quarters of the world. I became the north’s largest city, Norway’s first capital city and the seat of royalty. So important was Bergen by the 13th century that the Hansas – the German medieval guild of merchants – opened one of their four European offices on the wharf called Bryggen. Some of the Hansas chose to become Bergensers. And so have many others throughout the centuries. 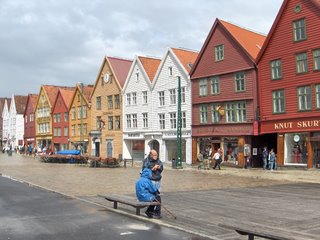 But Bryggen stays the same, its contour just as it was in the 11th century, untouched by shifting times. It has become a symbol of our cultural heritage and has gained a place on UNESCO’s World Heritage List. Bergen has become a World Heritage City. Bergensers are proud of their city and of their city’s traditions. They look after their past because it is a part of their living present. A city with its feet in the sea, its head in the skies and its heart in the right place – full of infectious enthusiasm and happy to share it with visitors.

To meet my blogger friend:
Before I go on with some tourist adventures from Bergen, I have to tell you I also met my blog friend, Charles in Bergen. On Sunday he, his friend and I had a nice little chat over a cappuccino and even if short, it was really nice to have this chit chat with both of them. He is the one who did this wonderful makeover on my blog and I was of course so happy to meet him in person to thank him for his artistic work. 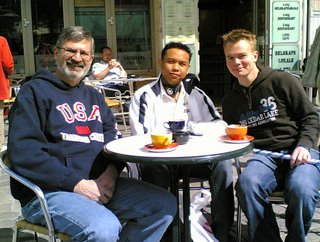 Please click and visit his blog and while you’re at it, visit his ‘The Queer Chef’ blog too!

The Aquarium:
It has one of the finest and most extensive collections of marine fauna in Europe. Seals and penguins playing in the large pools and the Aquarium have as one of Europe’s largest collections of fish and invertebrates. One million litres of clean seawater are pumped up from depth of 130 meters, allowing as one of the few aquariums in the world to keep a shoal of herring. In addition, they have a number of 100,000 litre fresh water aquariums containing fish from all parts of the world. 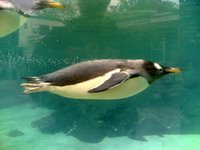 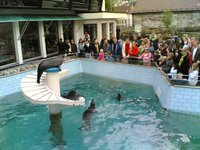 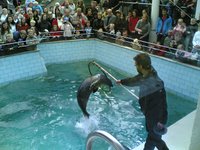 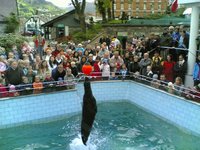 I had my mobile phone camera ready of course and when they feed the pinguins and seals, they do all kinds of trick to get their daily meal.

Buekorps – Boy’s Brigades:
A Buekorps (literally “Bow Corps” or “Archery Brigade”) may, very superficially, be described as groups of boys who take to the streets of Bergen each spring and march to the beat of drums, flying their flags and showing their uniforms. To understand how the BUEKORPS came to be, and why they have existed in their present form for almost a century-and-a-half, it is necessary to have a look at the history of Bergen itself: Up to the 1880´s most Norwegian towns, including Bergen, had their own Citizens´ Guards. This was a “Home Defense” force to be called upon in times of crisis, and they had weekly marching exercises on suitable open parade grounds in town. 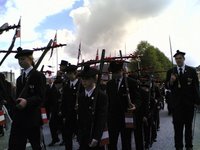 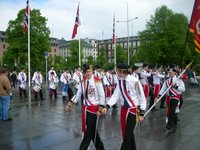 There has been a large number of Buekorps in Bergen, today only twelve remain. Among them can be found several of the very first ones to be organized, and therefore have about 140 years of uninterrupted history behind them. They all march through the months of March, April and May, and to the uninitiated observer they still have the military character of years gone by.

Mount Fløyen:
Fløibanen in Bergen is one of Norway’s most famous tourist attractions and the only cable car of its kind in Scandinavia. One say you have not really seen Bergen before you ascend to the roof of Bergen on the Fløibanen funicular. 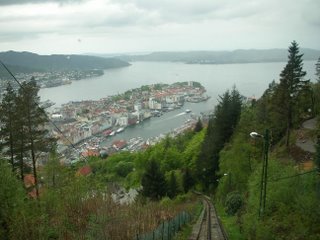 This is a must see for all visitors who want a full experience of Bergen. We had our lunch on the top: the lovely Bergen fish soup, the best I’ve ever tasted or almost as good as I do it myself:-)

There is of course a lot more to tell about Bergen, but I’ll stop here and just tell you it is a charming town. I recommends that you come and check for yourself one day!