My last report from my mother in law’s stay in Norway will be about my home town Porsgrunn. Some of my regular readers might remember my earlier post about the place I grew up, but let me give you a short summery:
Porsgrunn is a part of a cluster of municipalities south in Telemark that constitutes the Grenland area. Its neighbours are Skien, Bamble, Siljan and Larvik. Porsgrunn was named after a small shrub called “Pors” (Myrica gale), which grew on marshy grounds along the banks of the Telemarksvassdraget (Telemark river), where the porcelain factory is today. Porsgrunn has been an important harbour town in the Grenland area since the late 16th century. In 1653, the customs was moved further down the Telemarksvassdraget from Skien to Porsgrunn mainly because industrial waste such as sawdust and mud made the river too shallow to allow boats to go any further up the river. Moving the customs house from Skien to Porsgrunn in 1653 added to the flourishing harbour activity, and it became a thriving market town. It was granted city status in 1807, and in 1842, the city became an independent municipality.

Porsgrunds Porselænsfabrikk (PP):
Of course we had to visit the factory that has made the city famous all over the word, the porcelain factory. When I was a child, I did not know about any other porcelain than from that factory. In every house or public establishments, there was of course PP who ruled. I will give you a look at their trademark and also the city’s shield:

We had a guided tour in the factory’s museum by a charming young lady, Miss Lene. She told about the history and the process of how they made their famous product and with great commitment. She even put one of their porcelain coffee cup on the floor and stood on it, to prove how strong it is, but at the same time so delicate to look at. Being quite a tiny girl, she could see in our eyes we wanted more proof, so she told us: “we’ve even tried making a platform and parking a car on four cups, one in each corner, and they held it without breaking!” Then we were all convinced :-) 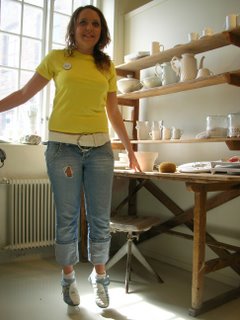 Lene to proof the strength
Taken with my Nikon CoolPix camera

She could also told us that they produce a wide assortment of porcelain products ranging from fireproof goods destined for professional kitchens, to exquisite, fine porcelain for the home. PORSGRUND is the main producer of porcelain flatware and products for the Royal family, and has been so for three generations. The factory is currently divided up into “industrial production” and “handcraft production”.

Crazy locals joke:
Let me end with a saying about people from Porsgrunn, which I hope you understand: Never serve them soup for a late supper! Why: because they will always turn the bowl over to see if it is made by PP.

So now my mother in law is back home in the US and life is back to normal. We had a great time together though and welcome her and the rest of the family over to visit anytime! It’s amazing how much you get to see when having a guest in your own country you know :-)

34 thoughts on “Porcelain from Porsgrunn, Norway”