Since this blog, my Terella, is about Norway and its significant four seasons, what is more natural than mentioning the Summer Solstice? The night before the 21st of June is the shortest as the sun rises at 3:49AM and sets at 10:46PM. A dramatic difference from the 21st of December when the sun rise at 9:18AM and sets 14:32PM. Please read my post about Winter Solstice.

Up north, above the polar circle the sun never sets or rises at this time – at all. Norway is the land of the midnight sun, you know! In the Nordic countries we have been celebrating the midsummer night for thousands of years, this “fire wheel” was an important, mysteries, magic and holy part of nature. In December, they held wild parties with lots of food and beer to boost the people’s strength and to forget and survive the darkness. In June, they held even wilder parties to celebrate and praise the sun shining almost 24/7.

Since it is June now, let me show you a couple of pictures from out in our garden last night at 11:59PM and even then, the sky is quite bright. 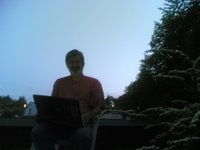 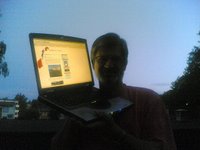 Taken with my mobile phone from my garden last night.

St. Hans – St. John’s Eve:
A blend of hedonistic sun worship, biblical John the Baptist, clever church politics, holy fire and witches pave the way of history that leads to today’s St. Hans celebration:
In Norway, Hans is short for Johannes, or John. The St. Hans celebration (at 24th of June) is for his birthday. Historians say that he actually was not born that day, but the religious leaders in the 400 centuries needed to replace the wild celebrations of hedonists. That’s the same as the way the church set up Jesus birthday to the 24th of December. The old, pagan tradition of gathering around bonfires on this night is now the only mark of this day. For a while, until 1770, it was a religious holiday, but today it’s all about the bonfires and summer celebration. 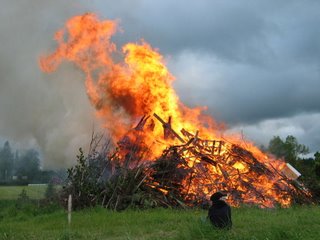 From Wikipedia – click here to read about Mid Summer!

Planks, rotten wood, leaves etc are gathered and set on fire. In addition there are often competitions for the children, lotteries and barbequing. There are many superstitions connected with the eve of St. John. For instance, the bonfire was believed to give protection from evil spirits and to keep witches away. Another superstition was that herbs and plants had magic powers on this night. Also, if a girl on this day picked 7 different kinds of flowers and put them under her pillow, she would dream about her future husband that night. 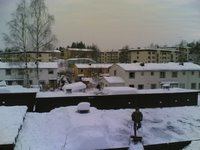 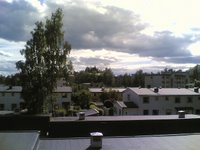 January 2006 – June 2006
Taken with my mobile phone from my second floor window.

50 thoughts on “Summer Solstice in Norway”