Still on vacation, we had some quality time with my sister and her two daughters visiting our summer house in Sweden this week. The weather is fantastic and it’s hard to go to sleep in the long, bright summer nights when you have a cosy family chat on the balcony. My sister is fond of trivia questions and the answers get even more creative the more wine we drink:-)

The top of the cream was our trip to Läckö Castle though, and I had my mobile phone available to give you a glimpse of this fascinating building with a lot of history in the walls. Let’s start with a pic of it (as always, please click on the pics to enlarge!): 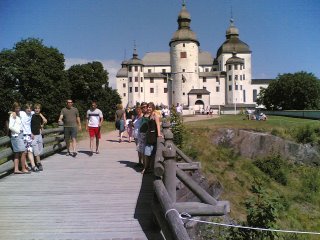 Läckö Slott is best known as De la Gardie’s magnificent castle on the shores of Lake Vänern, but it is much older. In 1298 Brynolf Algotsson, Bishop of Skara, laid the foundations for a fortified castle here. Probably no more than a redoubt surrounding a few simple houses, it was nevertheless strategically located in the middle of his diocese.

From their brochure I quote: After the reformation in 1527, Läckö ceased being a bishop’s castle, reverting instead to the crown. Gustav Vasa took possession. For a while Läckö was poorly maintained until his brother-in-law, Svante Sture, took possession, repairing and improving the property. He was followed by Hogenskild Bielke, married to Sture’s daughter Anna. He was made a baron and granted Läckö as his barony in 1571. His accounts and letters describe all tasks and inventories at the castle. Tradition has it that he was the one who ordered the still extant painting in a couple of the rooms. The couple was also known for having owned one of the largest libraries of that period. After various problems Hogenskild Bielke was sentenced to death and executed at Stockholm in 1605. 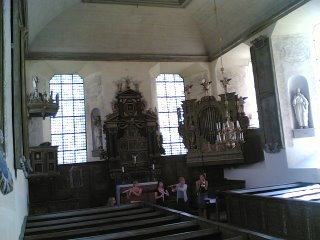 When we entered the castles’ porch, we heard some lovely music from the chapel. It’s built by Count Magnus Gabriel De la Gardie 1655-1668, the chapel tower is a technical masterpiece. Five girls where playing baroque music and really gave us the right atmosphere for our guided tour.

On the tour, I had lovely experience I have to share with you. Look at this painting first: 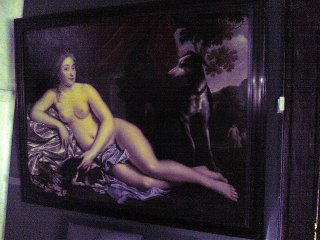 When my wife saw that she whispered to me: “Look, that’s me!”. I nodded recognisably and smiled, but she continued. “It’s Diana, the goddess of the hunt!” (Wife’s name is Diane, you know:-)

Let me end with sharing some of the lovely views we had: 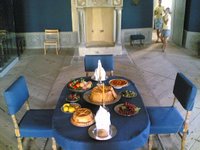 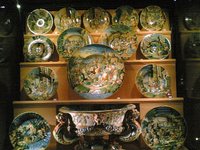 The dining room – The porcelain 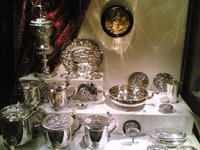 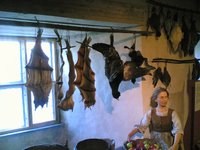 The silver wear – The kitchen

I just love to see and hear about history and the old days and my blog is after all about culture and tradition in the Nordic countries you know:-)

50 thoughts on “Baroque castle in the Swedish countryside”