By all means and with respect for the Americans, of course I congratulate you and Landis as the winner of Tour de France! He was simply the best! I’m looking forward to see David Letterman interview him:-) 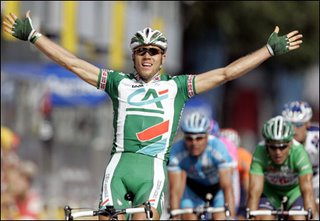 I would also like to congratulate my fellow Norwegians! There was a Norwegian cyclist, Thor Hushovd who won today’s race and best of all, he beat McEwen in the finish – his strongest sprint competitor!

Since this blog is about my daily life and habits, you just have to bear with me putting up this post to celebrate this historical moment. Norwegians can do more than ski, you know:-)

You might not know at all about Tour de France. Take a look by clicking here and you can read about one of the biggest sports event in the world! Watching this race with my family is a tradition I enjoy every year on my summer vacation:-)

There was another great Norwegian sports victory the same day and of course it should be mentioned for the record of today. Marius Thorp won the Silver Medal for the leading amateur at the British Open Championship after an impressive closing round of 71. Thorp finished the event on level par, seven shots better than Italian Edoardo Molinari – the only other amateur to complete four rounds. The 18-year Norwegian native ended in 48th place overall in the prestigious golf championship. Thorp intends to turn professional should he be successful at the European Tour in November.

Have I told you my favourite sport is golf:-)

Update #2 (2006.08.05):
It would have been a shame not to update this post with the fact that Landis was a cheater. As you know: The B sample also tested positive for a high ratio of testosterone to epitestosterone and Landis is dismissed by his team, Phonak. I also hope he lose the Tour title and face a two-year ban, as well the loss of his €450,000 first prize. If this is the case, Spanish rider Oscar Pereiro Sio will be declared the winner after finishing 57 seconds behind Landis, in second place. Go Spane, go!