The Göta Canal is one of Sweden’s best known and most popular tourist attractions. It’s close to our summer house and we visit it often. An impressive construction – let me start with some pics – click to enlarge – (the canal history in the end of this post!):

The canal locks – A romantic boat ride with my wife

I often tell you about my quality times with my wife. We had one of those here two years ago on an old river boat which is now used as a tourist boat. We packed a delicious picnic lunch of fresh shrimp, a loaf of French bread and a cold bottle of white wine and enjoyed it on board while cruising through the lovely country side. If one could save time in a bottle… but then again we have the pics and precious memories.

Mini canal for the little ones:
The area around the Norrkvarn locks near Lyrestad has been transformed into a world of adventure for the whole family. A miniature of the canal and this summer, we even watched a children’s theatre and several children’s activities were arranged. The mini canal is just 80 cm wide and 10 cm deep – a popular excursion for young and old. See some pics from this year: 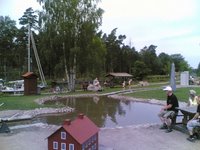 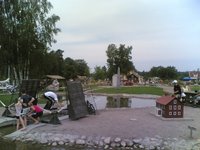 Taken with my Nokia mobile phone 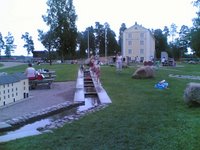 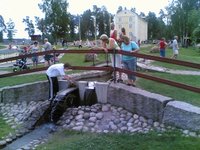 The canal history:
I know my regular readers like some facts, so here we go: The canal was built between 1810 and 1832. Construction was initiated and headed by Baltzar von Platen. It was one of the largest civil engineering projects ever undertaken in Sweden. It stretches from Sjötorp on Lake Vänern where we have our Summerhouse to Mem on the east coast. It has a length of 190 kilometres and a total of 58 locks. Of this distance, 87 kilometres are man-made.
In 1806, Count Baltzar von Platen, naval officer and government minister, produced a treatise on Canals and was later asked to submit a plan for the Göta Canal. On 11 April 1810, King Karl XIII issued a charter allowing the Canal Company to build and operate the Canal, and granted the company labour, land and forests for the project.
It was largely built by 58,000 billeted soldiers from 16 different regiments. During the 22 years building was in progress, about 60,000 men, including a company of Russian war prisoners and a number of civilian workers, worked a total of about 7 million man-days, each of 12 hours. 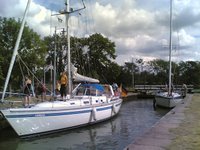 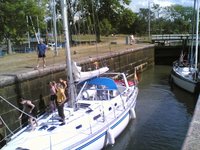 Update:
One of my regular reader and commenter on this post, Pearl, has provided information about a similar canal in North America. I’ll thank her so much for sharing and recommend you take a look for yourself by clicking here! Please visit Pearl and give her credit for this information too!

38 thoughts on “Summer at Göta Canal in Sweden”