All Norwegian are in ecstasy tonight since we have the privilege of playing against Brazil in football. I know you friends over the Atlantic call it soccer, but in the rest of the world the official sport is Football as they use their feet to kick the ball, you know:-) So why is this so special to Norwegians you might ask?

Well, Brazil is #1 on FIFA’s ranking and Norway is #49. Besides that, Norway is the only team Brazil never has beaten, as some of you might remember World Cup 1998 where Norway won 2-1. The result tonight was a draw: 1-1. The historical fact in the subject of this post still stands!

There is of course a lot of reasons why Norwegian welcome Brazilian for a friendly mach. Some are interested in the fascinating play, some more into culture, music and rhythm the spectators participate with. Lucky for the Brazilians it is still summer time in Norway and never has a Norwegian football field had more colourful spectators. One could hear and see samba rhythm and dancing all over the town and that is very exotic to the Norwegians you know. I could not resist borrowing a picture from the World cup in Germany 2006 to give you an idea:-) 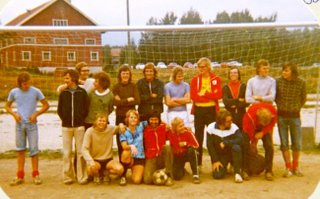 A Norwegian College University Team – where is Renny?

Of course I will not disappoint my readers by letting out a personal touch to this subject. I’ve played football since the ball reached my knees. In Norway football is the biggest sport (besides skiing of course) and every community has at least one field. In my home town we made our own when I was a child and my mother always knew where to find me: in the summer time at the football grounds and in the winter time at the ski jump. I played football up to college, but never made it to the national team. However we had fun playing when I was in College University and in the pic above you see my teammates in 1974. We where early in inviting the girls to play with as you can see:-)

Challenge to my readers:
In the pic above, can you find Renny? The winner gets a free lunch in Oslo with me:-)

Update:
And the winners are: The Queer Chef, CheH, Ms. Marti, Tin-tin and The Doctor. Congrats and remember next time you are in Oslo, there is a free lunch waiting for you!