I had a intellectual, cultural, food and art kick yesterday. Invited to a conference at The Henie Onstad Art Centre by da Vinci, a leading consulting company in Norway, I had great expectations. They where all fulfilled! The subject was Innovation and the new trend: Blue Ocean Strategy or how to make competition Irrelevant. We had some very interesting presentations about how to connect innovative ideas with commercial opportunities with examples from Norwegian companies like: Elopak, Vensafe and DnB NOR. It was a lovely round trip of excellent strategic future; innovating planning well combined and conducted by the host, da Vinci’s consultancies staff. Thanks for sharing – it was very inspiring! So I found the Da Vinci Code – the first kick. Then to the next one: 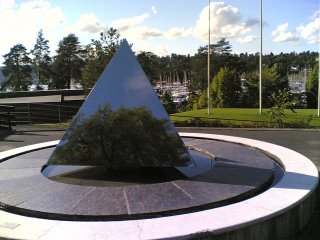 A sculpture in front of the centre. Please click on all pics to enlarge!

The atmosphere for such a conference was of perfect: The Henie Onstad Art Centre. The art collection is the result of Sonja Henie’s and Niels Onstad’s commitment to contemporary art and continually provides lovely exhibitions from international artist. The building represents a conscious attempt of expressive architecture. 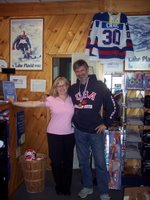 The centre also contains The Queen of Ice’s more than 600 trophy objects: my third kick that day! Sonia Henie the greatest figure skating Olympian ever with three Olympic gold medals in 1928, 32 and 36. In 1932 it was in Lake Placid and I’ve been there! When I was visiting my family in the US, my father in law and his wife took me a trip around Adirondack Nation Park and we took a lovely tour of Lake Placid. I had to buy some souvenirs of course and the lady in the store even gave me a gold medal:-) 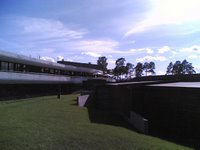 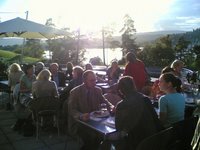 The centre’s balcony – our networking dinner.
Thanks to the host for a great adventure! 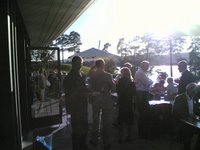 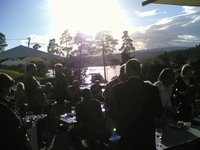 So was there any kick left then? Yes: the host, da Vinci invited us to dinner at the centres restaurant. We had tapas and delicious wine served on the balcony (see the first picture!). It was a prefect setting for networking, which I love. It’s great to meet new people to discuss and digest the interesting subject of the conference and I even met a colleague in IT whom I hadn’t seen for 12 years. Can you see the lovely surrounding in the pictures taken with my Nokia mobile phone around 8PM? So inspiring for networking, getting innovation inspiration and even discussing some new business opportunities. I found the Da Vinci Code – who could blame me for calling this the four kick event:-)

One final big kick for us today here in Norway! The police have finally recovered Norway’s lost treasures: Evard Munch’s paintings “Madonna” and “Scream” which were stolen two years ago. We had almost given up hope of ever seeing them again, but what would a da Vinci code be without a treasure at the end of the story?

The return of the sun this Winter Solstice day is a calendar milestone with an important impact on top of the northern hemisphere. The day has been celebrated for over ten thousand years throughout the world. Interpretations of the event has varied from culture to culture, but most have held recognition of rebirth, involving holidays…

Today is the day, so don’t say I didn’t warn you! I won’t claim its only a Norwegian phenomena of course, but sometimes almost our whole nation fell for it. I’ll get back to that, but let’s explore this tradition a bit at first (I’ve dug into it and always like us to learn something…

The Norwegian Museum of Cultural History comprises a huge park containing examples of all the major folk architectural styles from throughout Norway. It’s the oldest open air museum in the world (established as early as 1894) with 158 buildings representing different regions and time periods in the Norwegian history dating back to the 16th century….

Budapest (pronounced /buːdəpɛst/ 1.8 mill inhabitants), the capital of Hungary serves as the country’s principal political, cultural, commercial, industrial, and transportation centre – even more: is considered an important hub in Central Europe. It covers an area of 525 square kilometres (202.7 sq mi) within the city limits. Budapest became a single city occupying both…

Carnival in Mariestad Sweden gives a Scandinavian taste of Samba and Rio de Janeiro: parades with scantily clad beautiful “Brazilian” women and fantastic costumes. Most customs and celebrations are actually of pre-Christian origin; Fertility and the budding spring were celebrated. The first celebration may have taken place around 600 BC and a trace of the…

Easter Bunny or hare eggs dates back to pagan times and is more about fertility and celebration of spring than recent Christian Easter traditions. Honoured in many rite-of-Spring festivals, during the span of history, eggs represented mystery, magic, medicine, food and omen. So it represented the rebirth of the earth – the long, hard winter…