Sometimes your dream comes true earlier than expected. One of mine has been participating in carnival. I’ve seen it on films and TV and have imagined myself in the middle of folklore with happy people dancing in glamorous, tiny costumes to samba rhythms. Of course you all know it’s supposed to be a public celebration or parade combining some elements of a circus and a public street party. I’ve also read that the Carnival Season is a holiday period during the two weeks before the traditional Christian fasting of Lent. In my mind it also contains hot, sensual movements with belly dancing girls and partying all night long. In my mind until now, it also takes place in a warm climate and countries like Brazil, Colombia or Honduras. 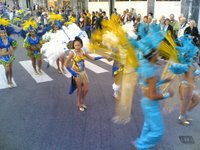 Last weekend, my dream came true! We had a couple friends over in our vacation house in Sweden and were looking up “what’s on this weekend” on the net. It says: “Karneval in MaRIOstad”! Typically referring to Rio de Janeiro and setting people in the right mood. We where so exited and could hardly wait until Saturday evening as the parade would take place at 7PM. I charged my mobile phone to the fullest and was ready to soak in the spectacular scenery. So I went crazy, shot 50 pictures and two videos and for me it’s great to declare that carnival can take place in cool Scandinavia, the best place to chill:-) 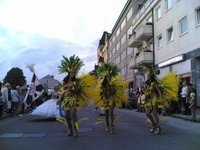 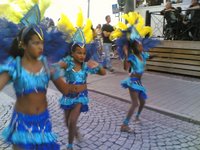 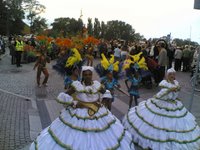 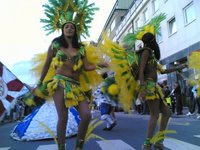 Bear with my excitements – I’ve also seen better photos – but I’m true to my profile of showing my daily life documented with my mobile phone shots. Some of my post is about ordinary things and some from special occasions. For me, this was a thrill money can’t buy. 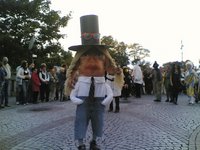 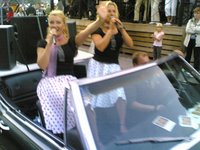 Some performers were of a more local kind, but they all had a great time and participated with heart and soul. They where singing and dancing and gave the audience a jolly good time. Some were even very enthusiastic and eager to be photographed and for all I know, was hoping to be a star or the winner of the best costume or performance trophies. 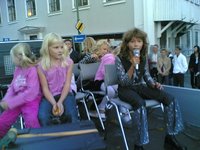 One truck, full of children, caught my eye more than others though. When I saw them, I was thinking a new star is born. Maybe a new Agnetha Fältskog, as in Abba. They became famous after winning the European Song Contest in 1974 singing Waterloo. This girl and her fellow friends could have started her career at this very Carnival in MaRIOstad – who knows:-) At least they did their best and as you can see had great fun doing it. That’s the right carnival attitude, don’t you think? Off course I had to try the video function on my mobile phone and this is how it came out:

If you like to see more pics, please see my Flickr account. For those who want more information about this town, click here and have a look around. It’s a charming town and maybe you will party with us at the next carnival in September 2007? We have plenty of room in our vacation house:-)

Vernal Equinox, when day and night are of equal length all over the world and the first day of spring in northern hemisphere, is another important milestone and significant change in our four seasons. In Oslo, Norway (60°North) our days are 6 hours longer than at winter solstice and get longer every day – to…

On my way from home to the office yesterday, I obeserved a lovely fall scenery – the moon was shinging so brightly. I was thinking: why worship the sun as it shines only at day when daylights after all? The sun is much braver and helpfull as shining at night! So I had to capture…

You never get to see (or have time to) interesting things as much as when you have visitors. It makes you feel like a tourist in your own neighbourhood. My regular readers know my MIL is in Norway, and today we’ll take you to the Norwegian Museum of Cultural History. You have been there with…

17th of May, Norway’s National and Constitution Day (signed in 1814), is celebrated as the most Norwegian there is. Nationalism, patriotism and childlike enthusiasm are shown, as we celebrate our freedom (after the occupation during World War 2 and 100 years of union with Sweden) and of course the signing of our Constitution. Adding to…

It’s hard not to talk politics at the 1st of May and then in a wider sense of the word. I was in Oslo to get an idea of the atmosphere today, with my Nokia mobile phone on hand of course. I’ll gladly share my experience with you. Let’s dig into the importance and impact…

Attending the Ian Anderson concert with his band Jethro Tull playing Aqualung, Living in the Past and of course Thick as a Brick, was a sensational nostalgic music adventure to me. I had the pleasure once before, 40 years ago and my very first concert ever. I was only 18 and for a country boy…