Let’s face it: After a wonderful, warm summer, the day’s gets shorter and the temperature falls. Another season has started and I don’t regret since I love the significant four seasons in the Nordic countries. A milestone was the 23rd when day and night were equally long and it’s called the Equinox. When I was young, I already was looking forward to Christmas, but now I’ve learned to enjoy every day of the change in nature and rather slowly build up the anticipation.

Another milestone is to have the Norwegian national dish: “Fårikål”, or Lamb in cabbage if you wish. Fårikål actually means “sheep in cabbage”. “Får” is however not the usual Norwegian word for lamb or sheep, but the Danish word for sheep. The Norwegian word for the animal is “sau”. “Får” is only used in the names of a few dishes and in some figures of speech, like “sort får” (black sheep). Let me serve you the dish and then give you my experience and the recipe: 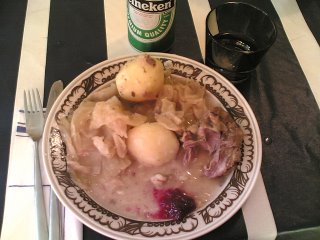 I’ve been eating it since I had my first tooth and every time at fall it gives me a lovely trip down memory line. Shorts and t-shirts were changed to jeans and sweaters, farmers were finished with the harvest and the boring old school days were back in their regular routine. I was a bit tired of playing football and was just waiting for the snow and ice to go skiing and skating. Something was brightening up the season though, especially the last weekend of September. We had Fårikål for Sunday dinner. The house was filled with the lovely smell from noon till dinner time, and the atmosphere was filled with anticipation. There was no way mom could surprise us and it was a part of my childhood highlights. Even my father contributed in the kitchen as he pealed the potatoes. Nothing was like an ordinary day:-)

This year we where one weekend late though, but anyway:-) Let me tell you how easy it’s done. I mean even I can make Fårikål, but then again I’m not only a man, I’m a Norwegian you know:-) 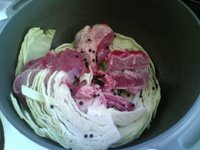 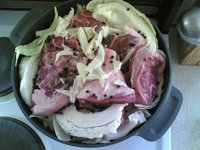 You just cut the cabbage into pieces and layer lamb and cabbage on top of each other with some whole black pepper in between. Some sew a sack to hold the pepper, but that’s cheating. One of the charming thing about eating Fårikål, is to pick the pepper out of your dish and if you don’t get all of them: well you have an extra sharp taste:-) 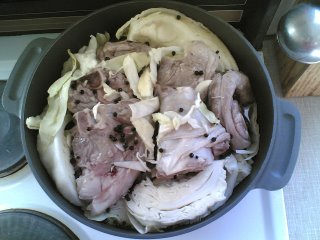 Two hours more and it will be perfect:-)

It should be slowly cooked for at least 4 hours on low heat. The longer it cooks the better as the cabbage gets tenderer and of course the lamb picks up the flavour from the newly harvested cabbage and vice versa. I start with just a cup of water in the beginning but after a while I pour little cold water mixed with flour to make the natural sauce. As you can see from the first picture – all taken with my Nokia mobile phone anyway – I like lingonberries with it, but that is of course optional.

And you might think the story ends here. But no; the dish tastes even better the second day! Then the best piece of meat might be taken, but my creative mom added some sausages for a full dinner day two. Sausages is not my number one favortie, but everything goes in Fårikål you know:-) 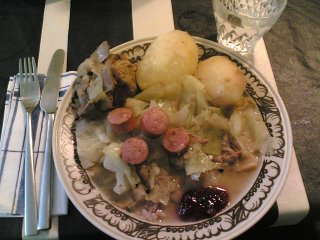 The day after and even better!

So by this I declare fall has really begun at RennyBA’s Terella. Stay tuned, because I love this season too and will very much like to share some of it with you in the coming month!

Rakfisk or fermented fish, is a unique food speciality from Norway, similar in process to the making of cheese, and can be as odiferous as the French cheeses. With a soft texture; in extreme cases, the fish flesh is so soft you can spread it – on Norwegian flatbread of course. It’s served uncooked together…

The world is getting smaller as we all swap traditions, habits, celebrations and feast from all over the world. Blogsphere is one place to pick up ideas as we get aquatinted with other blog friends and learn their habits. The tendency to a more global economy is another way to share and obtain the same….

Folk Music and Dance in Bunad at The Norwegian Museum of Cultural History – The Folk Museum – was on the program. In beautiful warm summer weather, my wife DianeCA and I had another quality time and as always we love to share with. I’ll get back to this great, Open Air Museum later –…

Kirkenes at 70ºN 30ºE is as far east as Istanbul and Cairo and as far north as Point Barrow in Alaska. You find this city in the municipality of Sør-Varanger with borders to Russia (196km) – the only NATO border to Russia – and to Finland (140km). Temperature measurements in February show a minimum of…

The Peace prize 2011 awarded by the Nobel Committee in Norway was to be divided in three equal parts between Ellen Johnson Sirleaf, Leymah Gbowee and Tawakkul Karman. This important yearly event is of course to be mentioned here since my blog is about Norway: our history, culture and traditions and also since I often…

Our family tradition, hunting for Easter Bunny Eggs, is one of my dearest and may be one of the best examples of recreational outdoor activity in the Norwegian woods. Every year the feeling of anticipation and excitement takes me down the memory lane. You may say I’m a bit childish, but I’m just fine with…