Fall is in the air and it’s time for celebrations and gratitude for what Mother Nature has provided during the summer. There are different traditions throughout the world regarding this phenomenon. Most known I guess is Thanksgiving in America. My blogger friend Mother of Invention has provided me with the following information: The origins of Canadian Thanksgiving are more closely connected to the traditions of Europe than of the United States. Long before Europeans settled in North America, festivals of thanks and celebrations of harvest took place in Europe in the month of October. The very first Thanksgiving celebration in North America took place in Canada when Martin Frobisher, an explorer from England, arrived in Newfoundland in 1578. He wanted to give thanks for his safe arrival to the New World. That means the first Thanksgiving in Canada was celebrated 43 years before the pilgrims landed in Plymouth, Massachusetts!

October festivals are perhaps more known in the mid Europe and maybe in Germany. The grains were harvested and it was time to make beer. Similar in other countries as grapes were made into wine. Grapes don’t grow so well in Norway, but the Vikings made their grains into beer thousands of years ago.

What I would like to tell you about today, is the harvest festival in Mariestad, Sweden. My regular readers know we have a vacation home there and visit quite often. So the 22th of September the whole community was in a festive mood. They call it the Harvest and culture Festival (see the logo above). The atmosphere was great, the audience was thrilled and excited and I went crazy with my Nokia mobile phone camera. I hope you enjoy this experience shown trough my eyes as much as my wife and I did! 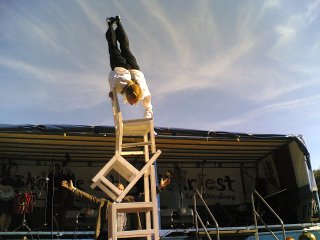 On the town square they set up a stage and The Black Benny’s Band was playing New Orleans Jazz. The Circus Carling was juggling and The Black Brother’s gave a thrilling performance. I also find it interesting that the decorations in front of the stage contain pumpkins. I think it’s influenced by the Halloween tradition which is defiantly not Nordic, but of course it’s an apparent sign of the harvest season. The colour is typical fall as well of course:-) 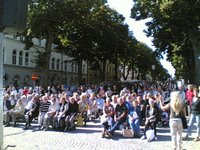 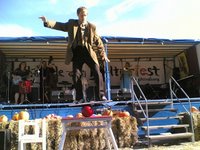 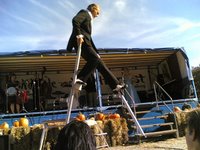 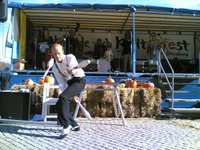 One of the Black Brother’s acrobatic tricks fascinated me and I just had to try capturing it live and in motion. My Nokia can take video too you know, so here you go:

My regular readers know I like to provide you with details and fact about my stories. This time Mariestad Tourist bureau and Culture and have provide me with detailed information. Visit their homepage and learn more about Mariestad – Vänern’s Pearl (Click for the British flag for information in English!).

Some of regular readers, especially Sidney and Expat Travels, have asked to see the fall collars in Norway. So far the fall has been rather mild, but soon there will be frost nights and then you know! So stay tuned:-)

32 thoughts on “Harvest festival in Mariestad”