Last Sunday my wife and I drove up northwest of Oslo for an autumn colour photo hunt. I have promised a post about it and was the perfect time except for the foggy weather. We where hoping for some sun as we reached higher elevation, but no luck. We ended up at Kongsberg 80 Km (50 miles) from Oslo and an exciting reunion with a town I lived in the late 70’s. So in this post you will see that fall has reached Norway, but most of all you will have a guided tour down some important history in Norway. 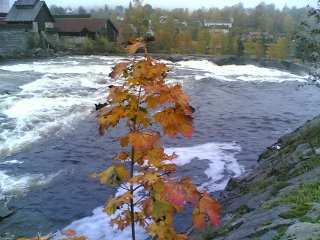 The water fall running right in the centre of the town is a landmark not to be missed. In modern times it has been tamed for making electricity, but still quite an eye catcher. So let me give you some more examples: 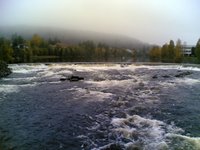 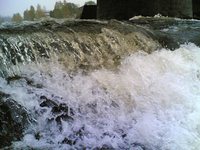 Regardless the sun, we still where hunting for the beauty of fall and saw this mirror church we could not resist capturing. I went crazy with my Nokia mobile phone camera and will give you some artistic examples just for fun: 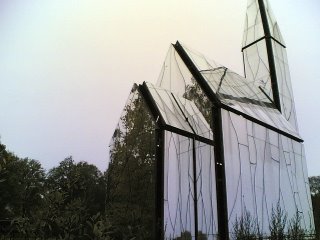 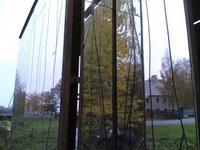 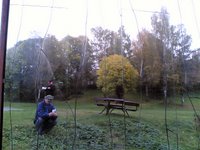 At the tourist information office I met two nice and knowledgeable young ladies and got a brochure from where I provide you with some interesting facts: The history of Kongsberg as a town and an important part of Norwegian history started in July 1623. A young shepherdess, Jacob Christoffersen and Helga Verp, found sliver in Sandvær’s northern mountain region. Roamers tell that they found it as they observed sparkles when a cow butts the rocks. The children’s parents kept the find a secret and began melt and sell silver themselves. After a while though, they had to disclose where the silver had been found. The place was examined and explored; a report was submitted to the King in Copenhagen (Norway was in union with Denmark), Christian IV (1577 – 1684). He took personal possession of the silver deposits of course and mining commenced on 18th of October, 1623. The following year he ordered that a mining town should be built locally and called it Kongsberg (Kings Mountains). Shortly after and for a while, it was Norway’s biggest city after Bergen and was planned to be the capital. History has shown other wise though. 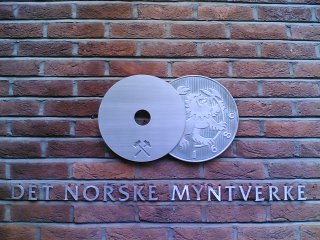 The first coins – called “Speciedaler” – produced from Kongsberg silver where made in Copenhagen in March, 1624. Keen linguists will note the similarity to “dollar” :-) The first coin to be stocked at Kongsberg was a 4-mark piece in 1686 and still in production today at the Norwegian Royal Mint. 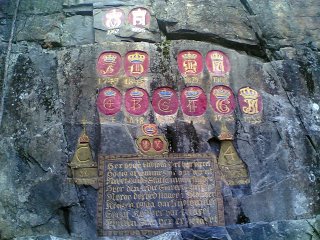 The girls at the tourist information office also reminded me of the Royal crowns carved just outside the city and we decided to go there and have our lunch. You see all royal visitors to the Silver Mines at Kongsberg have had their royal crowns and initials carved into the mountain side. This tradition was initiated when King Fredric V visited Kongsberg in 1749. All kings of Norway, both from the union with Denmark and after that with Sweden are carved, ever since the founder of the city, King Christian the IV. 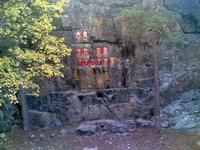 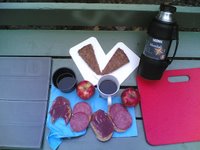 Although it was an ordinary Sunday and we where hunting the fall colour, it was a special day for us; our 7 year anniversary. My sweet and beloved wife had packed the backpack with something nice for our lunch and we sat on the bench enjoying the treat, the mountains, the nature and the Kings crowns. That’s what I call quality time and at historical ground.

I do hope you can have a glimpse of fall in the pictures, but also enjoyed some important part of the history of Norway. Please visit Kongsberg Turistservice hoempage – there is much more to explore and experience!
I haven’t given up the pure fall colour hunt, but you now know that I can’t promise anything on behalf of the goddess of the weather:-) I do hope we will get some sun soon to brighten up the reds and golds for you!

Oslo offers a pulsing city life, but the fjord with its islands as well as the mountains and deep woods are also right on your doorstep. Exploring the environment in this compact capital of Norway was the aim of the Oslo Blog Gathering’s participants. Since VisitOslo gave everyone the Oslo Pass, we had the use…

Happy blogaversary to Terella.no! As many of you may remember from previous years, my adventure with blogging started out as an experiment. I was lecturing a class in “Technology Business and the Society” at the Norwegian School of Management and among the topics was a new phenomenon; Blogging. Considering myself a network evangelist, the concept…

The 26th annual American Independence Day 4th of July celebration in Oslo’s Vigeland Frogner Park was a grand success! The American Coordinating Council of Norway (ACCN) arranges this celebration every year and we just love to participate. Like Norway’s Constitution Day the 17th of May, a national holiday is in many ways like a family…

It’s about time to get back to the main theme of my Terella; sharing about Norwegian culture and traditions. Nothing to me is more traditional, a time filled with expectation and anticipation, than advent time. Not that I consider myself especially Christian, but when the first Sunday of Advent appears, a lot of lovely memories…

Norwegians love outdoor life associated with voluntary physical activity or use of leisure time outdoors in nature. With leisure means the air outside, and you should not be confused with English free or clean air, or even free of contamination. However, that’s what you get and it’s of course an important part of the recreational…

Gutenberg House in Mariestad contains both an art gallery and a graphic museum. Built in late 1700s as a warehouse, this is the only remaining of the numerous wooden buildings that previously lined the harbour. It’s therefore a valuable element of the old part of Mariestad in Sweden and well worth a visit: – What…