Last Sunday evening I had an experience of a lifetime. I was invited with my bonus child’s class and their parents to play Curling. You might wonder why I am so excited about this, but Curling is a sport that fascinates me, especially when it comes to European and World Championship and of course the Olympics. There only a handful of curling rinks in Norway and just a few hundred active players, but both men and woman teams do very extremely well in international competition. I know I have a lot of Canadian readers and your country is very active in the sport of course. Some of you might remember though, both Mr. Pål Trulsen and Mrs. Dordi Nordby – the most famous Norwegian skips. But we where true amateurs, most of us hadn’t tried it before so let me start with a picture to demonstrate the newbie chaos: 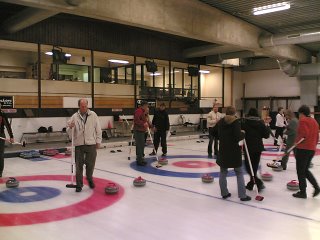 When we got there, my anticipation grew as Dordi’s brother and his wife were the instructors for us, 17 children and 15 parents. I was in a sport nirvana and followed their introduction to the game very carefully. You don’t need a lot of special equipment to play curling other than special shoes with grip on one foot and a slippery one on the other – very slippery:-)

Part of the gathering was of course for the families to do something fun together to help us get to know each other better, beneficial for both parents and children. I did not miss that part of course and we had a fun and friendly atmosphere, but I must admit I was rather focused on the game. Sitting in front of the TV cheering the Norwegian curling heroes is one thing. It’s easy to criticise and be disappointed for a badly set stone, but I quickly learned it was much more difficult to control the stone and deliver a good one yourself. It was a real challenge! So let me show you some pics taken with my Nokia mobile phone by my wife. It’s a matter of delivering, sweeping and trying to get the stone into the house: 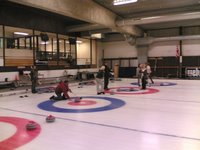 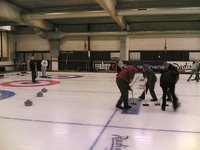 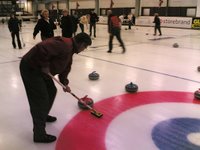 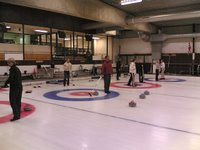 With all this excitement and anticipation for the sport, I can’t end this post without telling you the story of how I got to see the stars in Curling. I told you one of the shoes was slippery – very slippery. So after delivery of my very first stone, I lost my balance and fell backwards hitting my head on the hard ice. I saw stars and moons and everything else in our whole galaxy:-) I woke up after a couple seconds as Dordi’s brother and a parent dragged me from the ice. My upper body was shivering and the world was a bit out of focus for a minute. You know what: I had to sit on the tribune for at least an hour with a ice pack on my head and watch the others playing:-(
After that I was allowed to carefully try and I was back in the sports nirvana again. I was a good boy – had the thrill of trying a stone or two – but mostly I was acting as a skip. The day after, on my wife’s order, I visited my doctor and he told me I had a concussion. His advice was for me to slow down for a few days and I have to my best ability. That’s why I haven’t been as active visiting your blogs and commenting lately. Please don’t feel neglected!

My next post will be my first year blog anniversary post on the 12th of November, so stay tuned!

Update:
I should have known that some of you doesn’t have a clue about this sport. Click here for more information!

Even if I don’t consider mine as a food blog, I realize there have been some posts about it lately. This time I’ll take you along to a culinary feast at Lemongrass. I was there with some colleagues from The Norwegian Computer Society this week. I’d been really looking forward to it, as I love…

Driving down to Porsgrunn, my home town, always brings me down memory lane. I did it last week and the same thing happened. The closer I get, the more the memories come – when I was young – when life started – when the whole world was mine – unexplored and full of new adventures…

May is a lovely month – most Norwegians believe it’s the most beautiful: Never is the grass greener, the tulips bloom and beautiful lilacs spread their intoxicating scent. May is the month of plenty of holidays and nearly summer. It is the month to buy new shoes, summer dresses and ironing the flag. May is…

This post isn’t actually about SEX – rather about SEO (let me get back to that later!). But since I’m at it and normally report about my daily life in Norway, let’s talk a bit about the movie as it has been impossible not to notice the world premier here in Oslo too. In addition…

This blog is about sharing my daily life. This time I have decided to share some of my professional side as a CEO in EUCIP Norway Ltd. – providing a new European standard for certification of IT-professionals. As a network evangelist, I love to attend seminars and congress to meet others for business and social…