I know my regular readers are anxious to hear about my trip to Brussels, but it’ll have to wait. You see last evening I had an IT serial entrepreneur and award blast and I just can’t get it out of my head. So since this after all is a blog about my daily life, I was thinking why not blog it?

The occasion was the yearly IT Award Ceremony hosted by The Norwegian Computer Society (NCS = DND) in SAS Hotel, Oslo. There were awards given out in categories like “IT Security”, “Usability”, “Competence”, “Creativity”, “Best Net Service” e.g. to software companies, consultants, organisation or others that have provided some special and good solutions within IT and the internet last year. I’ll get back to the awards after telling you about the key note speaker who really gave me a kick. It was Morten Lund giving the speech: The Next Big thing. It was an educational, insightful and above all an inspirational presentation about believes (and not believes), thoughts and ideas of an entrepreneur and startup ideologist – digging the VC soil. 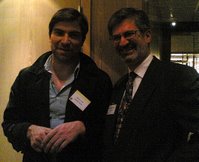 Here is what a friend of his, Michael Lee from HelloGroup writes about him on his blog: “Morten is the kind of guy that accomplishes more in a month than most of us do in a lifetime. As a self-described Neo-Classical serial entrepreneur, Morten’s impact on the world has left an indelible mark. He has founded and invested in 40 high profile tech start-ups including VOIP star Skype (recently sold to eBay for $4.3 billion), anti-virus consumer brand Bullguard, Scandinavian web agency NeoIdeo (sold to Leo Burnett), high performing Chinese browser Maxthon with 62 million downloads and Play65.com the world leader in online backgammon.”
I was also talking to Morten during the party and it was interesting and amusing to share thoughts and ideas with him. As you can see, I also got the chance to take a picture and I told him it would be on my blog:-) Please visit his blog ‘It’s all about luck’ and tell him you’ve seen the picture and that I’ve sent you!

Back to the awards then: To give you an idea, I’ll provide you with a couple of pictures I took with my Nokia mobile phone. Among the guests who were presenting the awards was The Minister of Transport and Communication and Minister of Government Administration and Reform. So here we go: 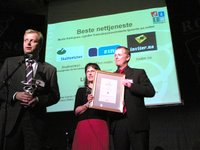 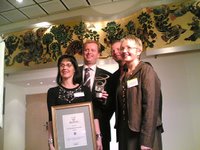 Left: The price for the best net site service – on stage. Right: With the price presenter, The Minister of Communication (on the right hand side). 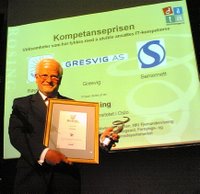 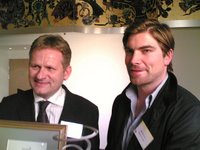 Left: The price for Competence. Right: CEO of IBM Norway Mr. Thorkildsen, won the price of IT Manager of the Year.
Price presenter: Morten Lund. 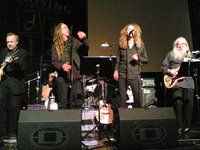 I started to call this a blast and of course there was more to it. A famous rock artist from Norway, Øyvind “Elg” Elgenes (from Dance with a Stranger) had gathered some musical friends especially for the event and they called themselves The Moose Brothers Band (Elg is moose in Norwegian!). They accompanied the different awards so well playing music from the 80s and 90s suitable for the prize categories. It was truly my kind of music and since the IT industry has become kind of mature, I didn’t have to feel that old myself either:-) One of the Ministers’s even told us she had been to Dance with a Stranger concerts and had front row tickets!
I even captured a video with my Nokia mobile phone, showed him afterwards and asked if I could publish it on my blog. He said ‘Yes of course, it would be cool’, so with permission of the band leader himself, I have the privilege to give you provide you with a world premier. My apology for the bad quality, but it was difficult lighting and after all it is my mobile phone. Please click here and visit his website too and listen to some of his new music: