I just love Brussels and so will you after I’ve given you a peek into this wonderful European town. I was there in a meeting last weekend and on Sunday I was walking around on my own to breathe in the cultural atmosphere. Let’s have a quick update of the country: The Kingdom of Belgium is a country in northwest Europe bordered by the Netherlands, Germany, Luxembourg and France and is one of the founding and core members of the European Union. Belgium has a population of over ten million people, in an area of around 30,000 square kilometers (11,700 square miles). And then the city: Brussels is the capital of Belgium and the administrative center of the European Union. This has earned the city the title of the Capital of Europe. Brussels has been given its character by the coexistence of French and Flemish culture, and it is nowadays home to nationalities around the world, adding a cosmopolitan flavor to its atmosphere. The vibrant atmosphere of Brussels is further enhanced by picturesque medieval streets, lively squares, beautiful boulevards, impressive monuments, spacious parks, cosy cafés, interesting restaurants and an active cultural life. I had 50 pictures in my Nokia mobile phone camera after walking around in the city center and here are a few to give you an idea: 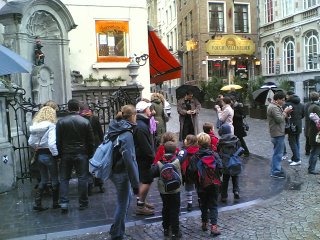 Let’s start with this famous boy: Manneken Pis (“little man piss” in English), is a Brussels landmark. It is a small bronze fountain sculpture depicting a little boy urinating into the fountain’s basin. Similar statues can be found in the Belgian towns of Geraardsbergen, Broksele and Hasselt. Manneken Pis means as much to Brussels as the Eiffel Tower and Statue of Liberty mean to Paris and New York. The tiny statue was cast in bronze in 1619 by Jerome Duquesnoy but was unfortunately destroyed. Another was cast to replace it in 1630. Seemingly destined to doom, the replacement was repeatedly attacked by the English and the French. The spirit of the tiny boy could not be annihilated however, and his remaining fragments were gathered up and used to form the mould from which today’s Manneken Pis was cast. During high season, visitors from around the world gather to see the little; weeing statue’s ever-changing wardrobe. This day he was wearing a uniform and I’m sorry I don’t know exactly what kind – could anybody help? 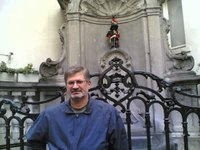 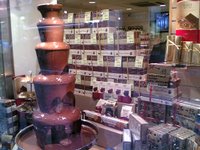 Of course one cannot talk about Brussels and Belgium without mentioning their lovely chocolates. To the right, you see a shopping window just five steps away from Manneken Pis. Brands of Belgian chocolate, like Neuhaus and Côte d’Or, are world renowned and widely sold; even the cheapest and most popular brand, Leonidas, has earned a reputation for its quality. 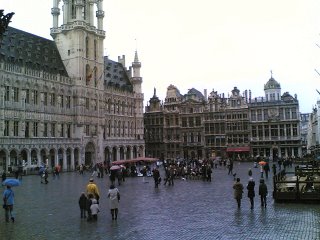 Five minutes walk from there you find The Grand Place, the central market square of Brussels. It is surrounded by guild houses, the city’s spectacular Town Hall and the Breadhouse. The square is the most important tourist destination and most memorable landmark in Brussels next to the Atomium. 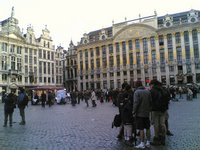 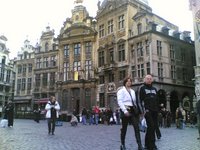 In the 13th century the predecessor of the Breadhouse was a wooden building where bakers sold their bread in a covered market: the Dutch name Broodhuis recalls this function. It was replaced in the 15th century by a stone building for the administration of the duke of Brabant; when the duchy fell to the Habsburgs, the Maison du duc (Duke’s house) became the Maison du Roi (King’s house). In 1873, the city entrusted architect Victor Jamaer to restore the battered structure in neo-gothic style. 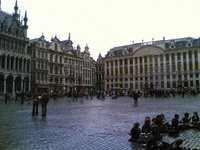 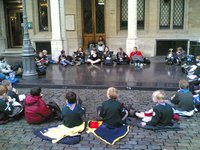 When looking around in the crowed, I realised there was a lot of scouts. In groups they where gathering all around the place. To the right you see a group having their lunch in a very scout way I would say – very cute:-)

Belgians have of course a reputation for loving waffles and French fries (both originated at Belgium). The national food is steak (or mussels) with French fries and lettuce. Even more interesting I think, is that Belgium produces over 500 varieties of beer. Belgian beer comprises the most varied and numerous collections of beers in the world. Belgian beer-brewing’s origins go back to the Middle-Ages, when monasteries began producing beers. Unlike in other European countries, Belgian beer production remained alive due to the 1919 Belgian “Vandervelde Act” that prohibited the sale of spirits in pubs, inducing the market to produce beers with a higher level of alcohol. The Vandervelde Act was lifted as late as 1983. 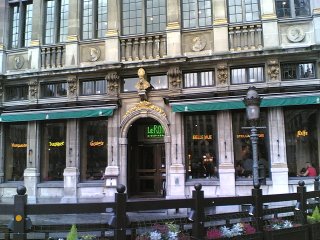 If you like to have a taste of Belgium beer, Le Roy at Grand Place is a must. I remember last time I was in Brussels was for the European football championship in 2000. I was then in Le Roy after Norway’s lost and was out of the tournament. Never has a Leffe tasted better:-) 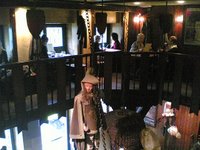 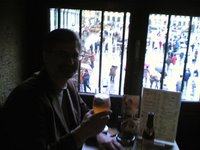 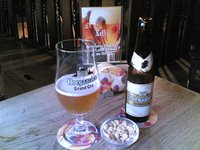 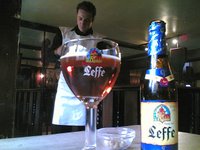 I had to go in this time as well of course, and taste some of the variety they can offer. If you like beer, this is the ultimate place. If not, you’ll have a lovely view of Grand Place!

I’ve decided to end up with some beautiful Belgium art tradition; their special hand craft of lace and embroidery. Again not far from Grand Place, you find this shop covered with this traditional sewing art. I met a nice, young woman in this shop who showed me and told about this wonderful tradition. The pattern various from district to district, but I hope you understand: it will take to long to go into details. So for now, just enjoy the pics taken by mo Nokia mobile phone. 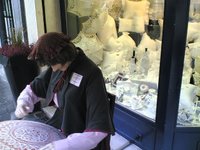 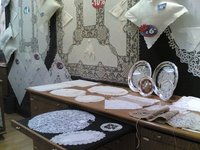 I do hope you’ve enjoyed this post as much as I have when writing it and searching the net for backgrounds and detailed information. It might have become a bit too long, but I wanted to give you a peek you know:-) This post is also dedicated to a special blog friend of mine, Sidney from Belgium, who has a wonderful photo blog posting from the Philippines (I didn’t mean to make you homesick my friend!). Please visit his blog by clicking here as he is a brilliant photographer.

We had a lovely meal on Saturday at Les Brigittine’s too. My next post will be about that special and culinary sensation!

44 thoughts on “Brussels, The European Capital”