It’s about time to get back to the main theme of my Terella; sharing about Norwegian culture and traditions. Nothing to me is more traditional, a time filled with expectation and anticipation, than advent time. Not that I consider myself especially Christian, but when the first Sunday of Advent appears, a lot of lovely memories are running through my head. Advent of course refers to the four weeks before Christmas – the final count down:-)

To get into the right mood, I had another quality time today with my wife At ‘Norsk Folkemuseum’ – the Norwegian Museum of Cultural History – where you can experience and learn about traditional Norwegian culture and history. Walk with me down the memory lane while I show you some of the pics we took (mostly with a Nikon CoolPix cam. as it’s quite dark in Norway at this time of the year you know). 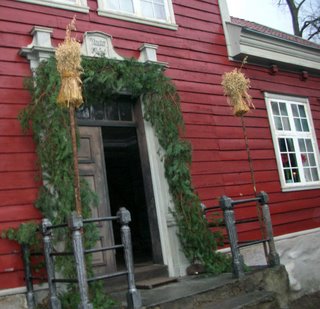 Let me start with a Christmas house entrance decorated with garland and of course ‘Julenek’: A symbol of Christmas in Norway. It is a stalk of oats tied to a pole. Traditionally, it was good luck if birds ate from the juleneks. It symbolized hope for good farming. Today, people throughout Norway hang juleneks as a general symbol of hope. 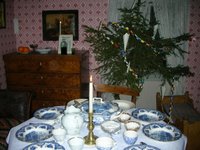 Norsk Folkemuseum gives excellent insight in how people lived hundreds of years ago. So let me take you into a Christmas decorated house from the 1890s. In the living room, the table is sets with the family’s best china. There are seven children in the house, and several of them sleep on the floor. The only way to have room for the Christmas tree is to hang it from the ceiling. The Christmas decorations are home made of course, some from glossy paper and some from newspaper. I was fortunate enough to live in a bigger house and had only one sister so we had the tree on the floor. I do remember though, that most of the Christmas decorations were home made. I have some of them on our Christmas tree still, but I have to get back to that as the tree mustn’t be decorated until the day before Christmas Eve you know! 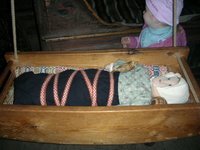 Another interesting little thing caught my eye when we went through all this old building, a cradle hanging from the ceiling and with a child inside. This child is ‘reimet’ as you can see which means to wrap the child’s legs with a wool cloth and tie a ribbon around the outside. They did that for practical reasons up until the beginning of the 20th century. It was impossible for mom to keep an eye on the little one while preparing for Christmas with all the cooking, baking and cleaning. They also thought the babies would get stronger and straight legs by doing that. I’m glad they didn’t believe that anymore when I was a child:-). My grandfather was ‘reimet’ though and he lived to 97 years of age. So it obviously wasn’t too bad anyway.

The Christmas marked at the museum is a collection of Norwegian hand craft and our food tradition. Let me give you some examples: 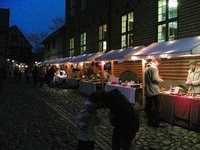 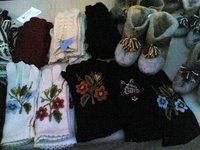 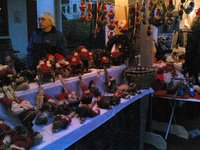 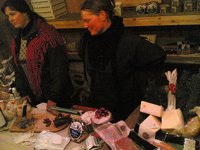 The four Sundays of advent are often traditionally celebrated with four candles with one to be lit each Sunday. Each candle has a specific meaning associated with different aspects of the Advent story. The first one almost always symbolizes expectant hope sometimes associated with prophecy. I’ll end this post with another Norwegian hand craft example: 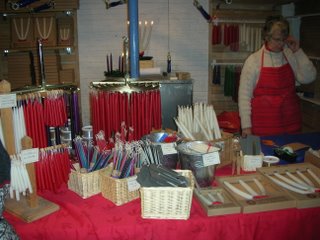 So today at dinner, our advent wreath was at the table with one candle lit. By this I declare Advent time begun and I hope I have infected you with some anticipation. There will be more of this in the next four weeks, so stay tuned as I’ll love to share with you!

42 thoughts on “Advent time in Norway”