Inspired of all the visitors and interesting comments on my last post when I declared Advent time begun, I’ve decided to give you a bit more from our first Sunday of Advent adventure. The Christmas Fair at Norsk Folkemuseum (the Norwegian Museum of Cultural History) is Oslo’s largest pre-Christmas event. At the fair you can experience: The Open-Air Museum with historical houses decorated for Christmas according to the traditions of the buildings’ early inhabitants. Christmas market gives you 120 old fashioned stands selling handmade products, arts and crafts, Christmas ornaments, speciality foods and other holiday treats. You’ll have entertaining family programs featuring concerts, folk dancing, children’s choir, Santa’s Workshop and more. There is also Church service in the 12th century Stave Church from Gol in Hallingdal. 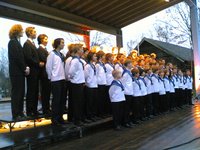 To get into the right mood, we started with the concert given by the famous Norwegian choir; Boys of Silver (Sølvguttene). They got their name primarily because of the shiny, silvery uniforms that were acquired in the beginning (for lack of other, more subtle materials). Later the name has been attributed to the special sound and clarity of boy’s voices, voices of silver. The choir has been an extremely popular institution in Norway, with its many performances on radio and television, in addition to concerts all over the land. The choir has toured internationally, and has frequently visited other Scandinavian and central European countries. Sølvguttene has visited USA and the former Soviet Union on several occasions. Last Sunday they gave my wife and me a wonderful Advent introduction as they song the traditional Christmas songs. All in Norwegian, but some are quite international like: ‘Silent Night’, ‘Jingle bell’ and ‘A child is born in Bethlehem’. 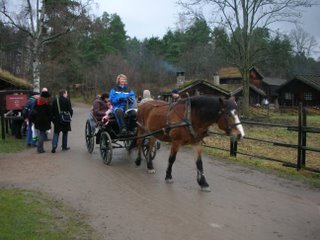 Another attraction for children (well, adults like it too:-) is the horse and carriage. I so much remember when I was there as a child how I loved to ride that and also when my own children loved to do it. This day I was laughing to myself as I debated: ‘Am I to old for this?’ I didn’t do it though, there was so much else to see and experience LOL 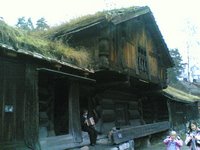 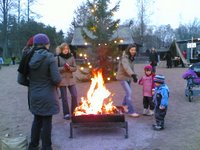 I mentioned the old buildings, so maybe I should give you an example. The one above is probably from the 17th century, with its very special construction and the grass on the roof. There was even a man playing an accordion to give us the right atmosphere. The weather for the time being is unusually mild with a lot of rain. Folkemuset gives what’s needed of course, as we normally have temperature below freezing and some snow this time of the year. See how well the children are dressed for outdoor activities and also how they are drawn to the fire:-) Actually, if there is something missing in Advent this year, its that we don’t have any snow:-( 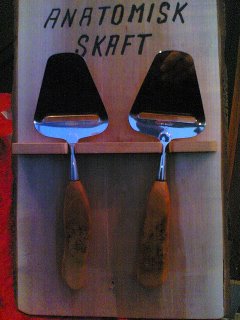 I’ll end this story with some more examples of Norwegian hand craft and maybe the most Norwegian you can ever find: ‘Ostehøvel’ – the cheese slicer! It was invented and patented in 1925 by Thor Bjørklund, a carpenter from Lillehammer, Norway. Its mass production started in 1927. Cheese slicers are very common in the Nordic countries, the Netherlands, Germany, France and Switzerland. The success of the cheese slicer in these countries is due to the fact that cheese is eaten mainly on bread and that most traditional cheese varieties in these countries are hard enough to be sliced. It’s a must tool on every breakfast, lunch or almost any table in Norway. How else could we have our piece of bread with the brown or yellow cheese? I actually hired one of Bjørklund’s grandchild on a job once, and I did not have to dig into her references that much as I know she came from a good family:-)

Please scroll down to the next post if you haven’t read all about the quality time I had with my wife at the first Sunday of Advent. I do hope by this I’ve set you into the right mood for the wonderful season to come!

40 thoughts on “The Christmas Fair in December”