This evening I had the great privilege of being invited to an event celebrating the Nobel Peace Prize winner, Muhammad Yunus and Grameen Bank, which immediately preceded the Nobel Peace Prize Concert. It was a great thrill to hear his speech on how Micro-credit has proved to be an important liberating force in societies where women in particular have to struggle against repressive social and economic conditions. Economic growth and political democracy can not achieve their full potential unless the female half of humanity participates on an equal footing with the male. 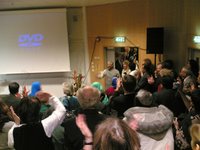 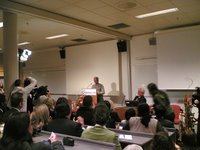 Following the winners speech, we heard a presentation from some of the clients of Grameen Bank who told their personal and moving stories of how small loan to by e.g. sawing machine, material, or even a cow, enable them to start small businesses which eventually allowed them to work their way out of extreme poverty and even employ others within their villages. My wife remarked that this must be true feminism. I do agree as it is a big difference between women fighting for their place in management and woman who are fighting for their family and villages survival. It really shows that little people with a good idea can achieve great things. 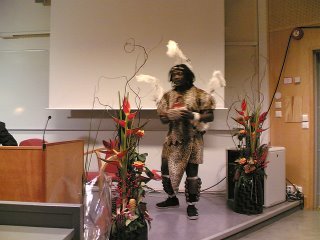 At the end of the event, we heard music from the African drum player George Kitogo Sferunjogi from Uganda. He uses the earnings from his performances to give Micro-credits to the people of his homeland.

Of course Norwegians are proud to have the honour of presenting The Nobel Peace prize every year. Due to this we’ve had winners visiting Oslo like Mother Theresa (India), Lech Wałęsa (Poland), Elie Wiesel (USA), Dalai Lama (Tibet), Wangari Maathai (Kenya) among others.

PS: For my regular readers: I will serve you Rakfisk tomorrow:-)