I have the pleasure of inviting you to one of the most traditional Norwegian dishes: Rakfisk. The first record of the term Rakfisk dates back to 1348, but the history of this food is probably even older. A meal served in the dark winter time around winter solstice (long before the fridge was invented!). This is the kind of food you enjoy together with good friends like we did last weekend when my blog friend TorAa and his wife visited us in Mariestad, Sweden. Let me invite you to sit in before I give more details: 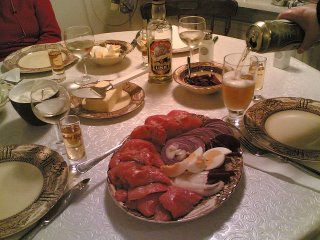 Dinner is served!
All pics taken with my Nokia mobile phone – please click to enlarge!

The word “rak” comes from the word “rakr” in the Norse language, meaning moist or soaked. The word descends from Indo-European “req”, which mean source or drop which is also related to the word rain. Rakfisk is put into a tub and then fluids are formed – it is brined. In the oldest sources, on the other hand, the Rakfisk is mentioned as “brine-cured fish”. Originally the fish was buried or put in underground cellars. The supposition for this conservation method is an even soil temperature at about 4C (39F) and that’s why the tradition is found around the polar circle at the northern hemisphere. We know of raking of salmon, herring and shark in addition to the gwyniad and trout/char that are the most commonly used today. Ours was a trout of course. 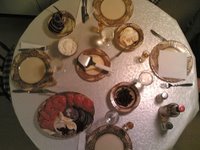 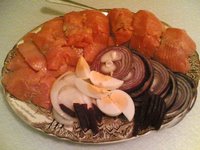 A convenient thing is that it does not need cooking since you eat Rakfisk as is. It’s usually served sliced or as a fillet with raw red onion, lefse (a traditional soft Scandinavian flatbread made out of potato, milk or cream and flour, cooked on a griddle), sour cream and almond potatoes. Some also use mustard-sauce, a mild form of mustard with dill. There is different traditions from every part of Norway – and don’t argue with them! – on the table above and in the rest of the pics, you see how we do it:-). Although not an everyday meal, approximately 500 tonnes of Rakfisk are consumed in Norway annually. 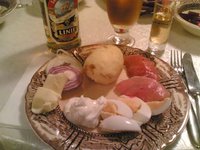 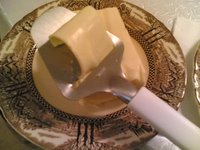 My plate – Butter with the cheese slicer.

Again, a good meal is only fulfilled if eaten together with good friends or family. The traditional food in itself invites talk of about good old days, traditions, Christmas time or Yule (click to read my earlier post for more information) and enjoying each others company. In that way TorAa and his wife was a perfect match. Another important accompaniment is what you drink to this dish. It has to be traditional too of course and then we are talking about the Scandinavian distilled beverage; Aquavit and beer. TorAa wanted white wine though (to save his stomach:-) Hi also introduced another great way of using a cheese slicer (cutting butter) as you can see above.

Since we were in Sweden eating and this blog is about culture in the Nordic countries I should mentioned: Rakfisk dish is related to their Surströmming and probably shares its origin in Scandinavian culture. I’m sure some of my Swedish readers can comment on this!

This is post two of a trilogy about TorAa and his wife visiting us in our vacation home in Sweden this weekend. The last one will be about the hilarious time we had Saturday when our wives went shopping. So stay tuned!