Typically at this time of the year, people in the Nordic countries have their Christmas party called Yule table. It seams to have roots back from the Saturnalia feast at which the Romans commemorated the dedication of the temple of the god Saturn, which took place on 17th of December. Over the years, it expanded to a whole week, up to 23rd. So we are talking about winter solstice festivals from a couple of thousands years back. Of course the Vikings held their winter solstice festivals too and they were wild and crazy parties. Who could blame them for celebrating the return of the sun in a dark (up to six hours daylight in the south of Norway and zero hours in the north) and very cold period? It’s all about a food and drink feast and inn the Middle Ages it became normal to let it stay on the table the whole Holiday season so that the poor and the nomads could help them selves. The modern Yule party is from the last turn of the 1900’s when the service business and tourism started in northern Europe. It became more popular among the middle class people to travel at Christmas time so hotels and restaurants began serving Yule food on the menu. After the Second World War it has more and more become a party arranged by the company for their employers.

I have a mixed feeling about these parties as there are so many of them and they often overdo it. The ultimate example this year was our own companies Christmas party was held just over the border in Sweden. I supported the idea of course as we got a feast and a night at a hotel, with breakfast the day after for a price of 1100 NOK (190 $ or 135 €). We had a jolly good time and I enjoyed the company of my co-workers as well as the food and the free drinks, let me tell you more about it: 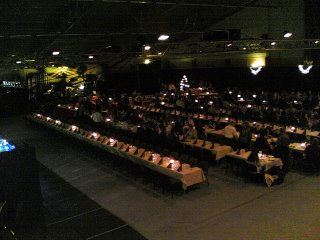 It was held in a sports centre and there where more than a thousand people attending (from different companies not just mine). Sorry for the bad quality of the pictures but it is taken with my Nokia mobile phone from the bleachers. There you can see the tables for each company party from the smallest for around 10 people to the biggest around 100. 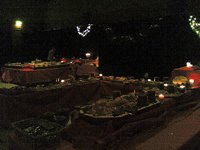 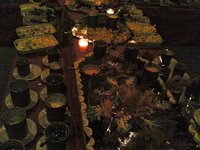 The buffet – Please click if you want a closer look!

We where served a buffet with all the Christmas food you could imagine, at least for the Nordics and especially the Norwegians as we where the majority of the guests. Again my apology for the bad quality in the pics but I hope you get the idea. 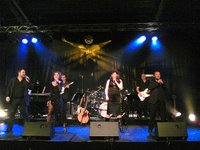 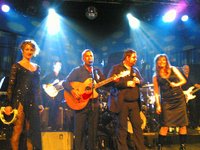 ABBA show at the Christmas party. 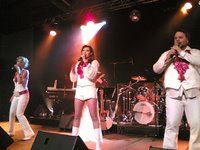 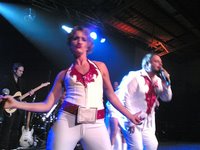 As if this wasn’t enough, there was a show after the dinner. A local singing group gave us a musical tour of ABBA’s fantastic carrier. The Swedish wanted to show their very best you know:-) It was quite funny to get close to the stage and capture them with my mobile phone as they where very photogenic. After the show a typical Swedish ‘dance band’ gave me the chance to cut the rug with my female colleges. So even if I am tempted to call this a sort of Christmas party factory, we had a very good time. I can’t remember when the party was over, but we had a night cap afterwards, so I guess I was in bed around 4 in the morning. A more sensible college called it a night much earlier though and I was glad because he was the one who was driving home the next day. On our way home we bought Christmas food in a mall. You might call this an ultimate ‘Harry’ tour (a local expression for Norwegians who travel to Sweden to fill up their cars with inexpensive food).

25 thoughts on “ABBA at the Christmas Party Factory”