Having a blog about Norway, the Nordic countries – our culture and traditions – it would be a shame not to mention one of the most important milestones; the return of the Sun. So let’s forget Christmas for a while, or actually; this has a lot to do with Christmas or Yule as we call it in the Nordic. Before I give you some history, let me first show you a picture taken yesterday morning (8 AM) to show you Oslo at dawn: 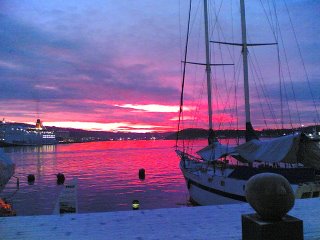 Oslo fjord at down – please click all pics to enlarge!

Yule was the winter solstice celebration of the Scandinavian Norse mythology and Germanic pagans. In Germanic Neopaganism, this celebration is largely reconstructed to various extents by various groups. In the northern hemisphere ca. December 21st and in the southern hemisphere ca. June 21. “Yule” and “Yuletide” are also archaic terms for Christmas, sometimes invoked in songs to provide atmosphere. People unfamiliar with ancient Norse mythology’s pagan traditions will not distinguish between Yule (Joul) and Christmas. This usage survives in the term “Yule log” (it may also persist in some Scottish dialects). In Sweden, Norway and Denmark, the term “jul” is still the most common way to express Christmas, or “joulu” in Finland.

What is certain is that Yule celebrations at the winter solstice predate Christianity, and though there are numerous references to Yule in the Icelandic sagas, there are few accounts of how Yule was actually celebrated, beyond the fact that it was a time for feasting. ‘Yule-Joy‘, with dancing, continued through the Middle Ages in Iceland, but was frowned upon when the Reformation arrived. It is, however, known to have included the sacrifice of a pig for the god Freyr, a tradition which survives in the Scandinavian Christmas ham.

Many of the symbols associated with the modern holiday of Christmas such as the burning of the Yule log, the eating of ham, the hanging of boughs, mistletoe, etc. are apparently derived from traditional northern European Yule celebrations. When the first missionaries began converting the Germanic peoples to Christianity, they found it convenient to provide a Christian reinterpretation for popular feasts such as Yule and allow the celebrations themselves to go on largely unchanged, versus trying to confront and suppress them. The Scandinavian tradition of slaughtering a pig at Christmas, and not in the autumn, is probably the most salient evidence for this. The tradition derives from the sacrifice to the god Freyr at the Yule celebrations. Halloween and Easter are likewise assimilated from northern European pagan festivals.

So with this Nordic history in mind, let me show you some pics taken with my Nokia mobile phone the last days. With 6 hours daylight, we enjoy the lovely view and the significance of this season. Within 6 months we will have almost 24 hours of sunlight and I wouldn’t trade for anything in the world: 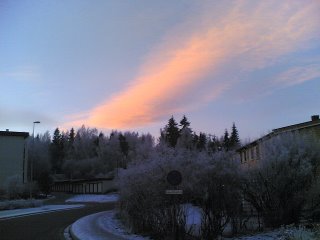 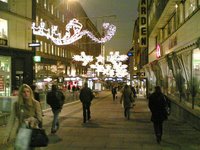 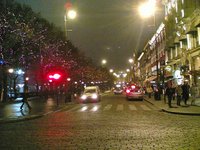 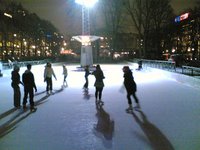 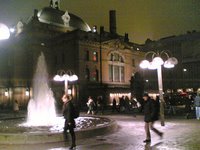 Skate rink and a fountain in Oslo.

From all of us to all of you: wishing you a joyful Holiday season!

33 thoughts on “Winter Solstice and Yuletide”