Since my blog also is about the four seasons in the Nordic countries, it’s about time for a weather report. Let me start with a couple of pics from the neighborhood taken last Sunday mid day. This is how I like it and how it should be from mid November until spring. Well, maybe a bit more snow – I like it when it’s more than one meter (3.2 feet) like I posted about last January – but as long as the ground is dressed in white, its okay: 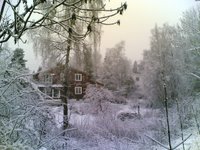 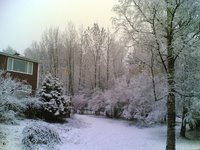 Taken with my Nokia mobile phone – click to enlarge!

Given the fact that we have around 6 hour’s daylight this time of year, snow gives us a much lighter effect. Even better it invites us to lovely outdoors activities like skiing, sledding or even making snow angels. I know some think its cold, but then I like to remind you of one of my slogans: there is no such as a bad weather, only bad clothes

In this part of the world everybody talks about the weather and this winter season we’ve had a lot to talk about. There has been much more precipitation this autumn and even in the winter months of October, November and December. The average temperature in December was 6 degrees above normal, meaning above freezing most of the time. It’s hard to get any snow then you know! Well, we had some in the end of October which lasted a few days and then again last Sunday as you can see on the first picture, but that was also soon washed away by rain a couple days later. I got new hope this afternoon though when snow was finely cheering up my bus trip back from the office. Here are a couple of pics from the neighborhood before I entered our house to have some quality time with my wife making dinner together: 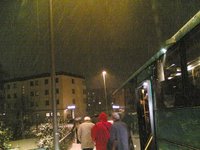 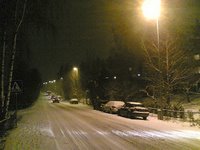 I don’t try to make a big deal out of this. I know temperatures and precipitation vary a lot from time to time. If you check my post from January 2006 in the ‘Archive’ link, you find a lot of nice snow pics from last winter. I think the tendency is kind of strange though. Looking at it with a good sense of humor, they say that Norwegians are born with skis on. I sure hope they won’t be changing that to born with rubber boots on their feet. How about you, regular and new readers: have you experienced wired weather this season? If you’ve had a post about it recently, I gladly update this post with your link – for the record.

I know my regular readers like facts and figures about Norway and the Nordic countries. A friend of mine has a web site with temperature development on earth the last 250 years with information from more than 900 selected locations worldwide. So click here and check for yourself – all over the world!

Update:
A new blog friend, Pasticciera, now living in the Italian alps have a no snow post from where the last year Olympics took place. Take a look!