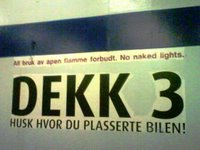 From Norway to Sweden, Denmark, Germany and for that matter to Great Britten, you can travel by boat. Some call them cruise ships, I call them ferries. Since there are a lot of tourists, you often find signs in different languages. When we went to Sweden in the Christmas holidays, the picture to the left caught my eye. Direct and good translations can be difficult. Even if you use the ‘right’ words, the interpretation might give a wild association. On top of the pics (click on it to enlarge!) in red letters it says in Norwegian first: ‘All bruk av åpen flamme forbudt’, meaning: ‘No open flames allowed’, but as you can see the words in English are: ‘No naked lights’:-) 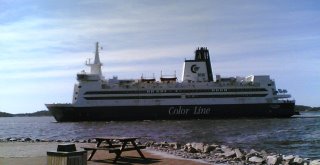 One of those ferries captures with my Nokia mobile phone.

When my wife first came over from US, she started to read the signs and tried to understand what they meant. The one to the left was one of them (click to enlarge!). The pictures shouldn’t give you any wrong ideas: In some areas they want you to slow down, so they put speed bumps on the road. In Norwegian speed is ‘fart’ and to slow is ‘dempe’. Sometimes you also run into speed control and in Norwegian that would be: ‘Fart Kontroll’. My wife always thought this was pretty funny. So when your visit Norway, ask before you get the wrong idea of what’s going on.

Speaking of the language, as I know my regular readers like to learn something from my posts: Norwegian is a Germanic language and is closely related to and generally mutually intelligible with Swedish and Danish. Together with these two languages as well as Faroese and Icelandic, Norwegian belongs to the North Germanic languages (also called Scandinavian languages). Due to isolation, Faroese and Icelandic are no longer mutually intelligible with Norwegian in their spoken form, because mainland Scandinavian has diverged from them.

As established by law and governmental policy, there are two official forms of written Norwegian — Bokmål (literally “book language”) and Nynorsk (literally “new Norwegian”). From the 16th to the 19th centuries, Danish was the standard written language of Norway. As a result, the development of modern written Norwegian has been subject to strong controversy related to nationalism, rural versus urban discourse, and Norway’s literary history. Historically, Bokmål is a Norwegianized variety of Danish, while Nynorsk is a language form based on Norwegian dialects and patristic opposition to Danish. 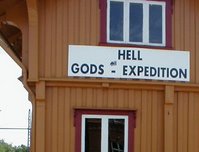 Let me end this post with another confusion you might have if you are visiting a certain place in Norway called Hell; a small village with a population of 352. It has become a minor tourist attraction because of its name: people like to take the train there to get photographed in front of the station sign. What was possibly Norway’s most popular postcard, at least among English-speaking tourists, showed the station with a heavy frost on the ground—Hell frozen over in fact, though there was no caption to make the point. Visitors to Hell can even stay at the Hell Hotel. The pic to the left is from the old warehouse in the Hell Station there is a sign “Gods-expedition”, an old spelling of the Norwegian word for cargo handling office. The name Hell stems from the Old Norse word hellir, which means “overhang”, “cliff cave”. The Norwegian word ‘hell’ can also mean “luck”. A yearly blues festival, the Hell Blues Festival, takes place in the area around Hell each year. The festival changed its name to Hell Music Festival in 2006 to open their doors for music other than blues.

Have I made my point: Don’t judge Norwegian by signs as it can be much more pleasant than you think:-) Even if it is Hell on earth LOL!!

Warning: We are celebrating my wife’s birthday this weekend and even the in-laws are coming over from the US. So there might be less posts and comments from me the next 10 days!

Update: My blog friend Mrs Lifecruiser had a similar post about the Swedish language once. Take a look!

35 thoughts on “No nakedness on Nordic cruise ships”