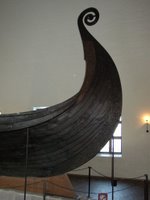 Regular readers know that we are celebrating my wife’s birthday and the guest of honour is her father and his wife coming over from the US. This gives great opportunities to explore Oslo area and the landmarks. In this post I have the pleasure of taking you with to The Viking Ship Museum. It displays the large Viking ships Oseberg, Gokstad and Tune, as well as founds from the chief grave at Borre in the Vestfold district. The three ships are the best preserved Viking ships known, found in royal burial mounds in the Oslo fjord. As burial ships, carrying the dead over to “the Other World”, the ships were equipped with unique treasures such as wagons, horses and especially textiles which are seldom preserved from the Viking age, now on exhibit at the museum. I had my Nikon Coolpix cam with (click to enlarge the pics!) and here are some of the highlights: 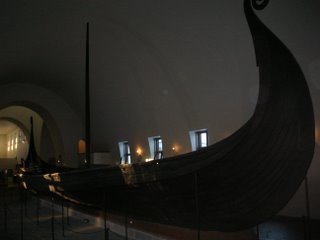 The Oseberg Ship was found in a large burial mound at the Slagen farm in Vestfold and excavated in 1904. The ship was built in around 815-820 A.D. and had been used as a sailing vessel for many years before it was put to use as a burial ship for a prominent woman who died in 834. Under the ship was a thick layer of blue clay, while the mound itself was built up of turf. This explains the excellent state of preservation of the ship and the other objects of wood, leather and textiles. 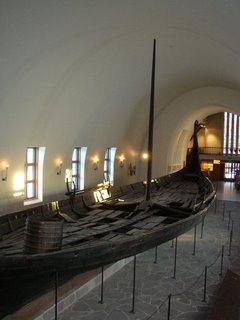 The ship, built of oak, was 22 meters long and 5 meters wide. The 12 strakes were secured with iron nails. The ship was designed for both rowing and sailing. With a square sail of about 90 sq. m., it could reach speeds of over 10 knots. The top strake had 15 oar holes. The crew probably sat on their ship’s chests. 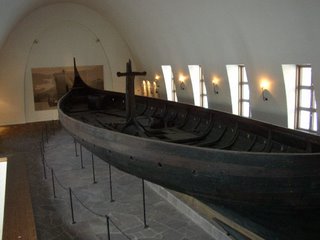 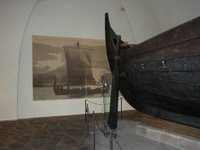 The Gokstad ship was found in a large burial mound at the Gokstad farm in Sandar, Vestfold in 1880. The ship had been built around 890 A.D. and later used in the ship burial of an important chieftain who died in or around 900 A.D. The preservation conditions in the Gokstad mound were as favourable as at Oseberg. The Gokstad ship, built of oak, is 24 meters long , 5 meters wide and is the largest of the three ships in the museum. It could accommodate 32 oarsmen and was much more sturdily built than the Oseberg ship. The Gokstad ship, although not as luxuriously outfitted as the Oseberg ship, was by far the more seaworthy of the two. It was demonstrated when a copy of the Gokstad ship sailed the Atlantic from Bergen to the World’s Fair in Chicago in 1893. 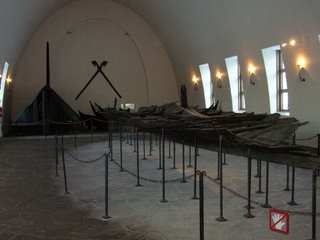 The Tune ship, from a large mound at Haugen farm at Rolvsøy in Østfold, was excavated in 1867. It was built at about the same time as the Gokstad ship, around 900 A.D. It was later used as a burial ship for a powerful chieftain. The burial furnishings are not preserved, but the dead man was also placed in a timber burial chamber. The ship itself was badly damaged. It is displayed in the museum in such a way as to show the construction details of ship building in Viking times. 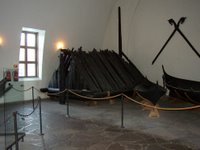 The burial chamber, two of the small boats and two tent verge boards from the Gokstad burial are displayed in the Tune wing. This burial chamber is the oldest example of the lafting technique known in Norway. Large sections of the roof were hacked away by the grave robbers. The small boats resemble boats still used in western and northern Norway, and testify to a long tradition of Norwegian boat building. Some of the other objects from the Gokstad burial are to be found in the artefact collection wing, such as bedposts with animal head ornamentation and fragments of a sledge. Horses and dogs were also part of the burial gifts. The harness and bridal mounts are of the finest quality. The most unusual item is the remains of a peacock, an exotic element in Norwegian Viking times. Fragments of gold thread woven into textiles found in the Gokstad burial are displayed in the textile room. 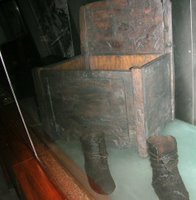 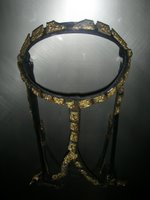 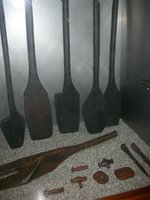 Our knowledge of daily life in the Viking Age comes mainly from archaeological finds. The graves contained not only jewellery, weapons and vehicle tools, but also other tools and household goods. These finds are exhibited in the museum. 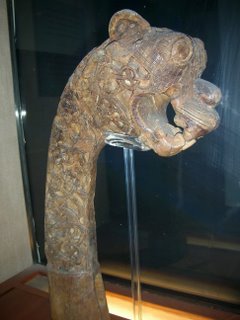 The animal head post were found in pairs. Some of them had a rope running through the mouth when they where found. Their use is not known, but they may have been carried in religious processions. Some other objects, such as the elaborately decorated bronze bridle mounts and parts of a sledge’s shafts are also to be seen.

Still busy guiding the in-laws and our next stop will be the city of Lillehammer where the winter Olympics took place in 1994, so stay tuned!

Update:
My blog friend Caledonia has written a great post about Viking heritage from a Scottish point of view – go read it!

33 thoughts on “The Norwegian Viking Ships”